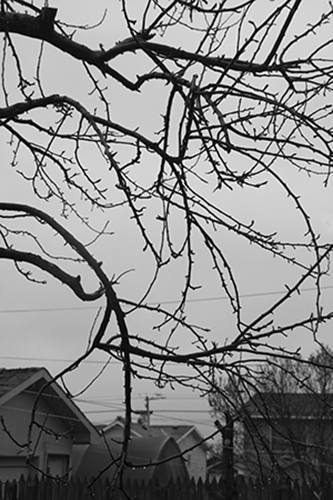 If I was prone to Catholic imagery, I would have used this pic with yesterday’s post (Good Friday). It was great stripping what little color was left from the image and have it look almost B&W.

After driving my mother to visit her friends, I headed for the neighborhood below old St. Mary’s College – the Catholic boys’ high school I attended – to scout it for a photo trip. OMG, the area between the railroad tracks and the slope of hill is a wreck. After the James Street area, it’s the second oldest part of town and it’s showing wear. Even when I lived here, it was known as a low-income area full of Protestants. And the economic migration for this non-ethnic group was to go from this central section to the east-end.

There’s no Catholic church in that central part of town, but it’s full of old Methodists, Lutheran and Anglican churches. For my grandparents’ generation it was a desirable neighborhood, because it meant you could move out of the tenements in James Street and into one of the many small, newly-built houses. Both of my grandparents were buried from a funeral home in this Protestant section of town and my parents have made similar arrangements. (The march to assimilation continues across generations.)

The original town was laid out between the St. Mary’s River and The Hill. The plain had room for the steel-mill, the tube-mill, the rail-yards, the highways and the workers’ houses. Along the riverbanks, long cargo ships unloaded coal and other raw materials needed to make steel. Through the locks, connecting Superior to the rest of the Great Lakes, ships brought out raw materials and finished steel. Modern Sault Ste Marie has moved away from the industrial yards that gave it life; it has moved to the top of The Hill. And modern Sault Ste Marie has followed the hilltop west, abandoning the once-desirable east-end. (The eastern part of town, and the portion of The Hill that borders it, is Indian land and not available for development.) Locally, The Hill has no identifying name, instead it’s named and added into conversation based on the street that climbs it – Second Line Hill, Bruce Street Hill, Pim Street Hill.