getting the ground ready 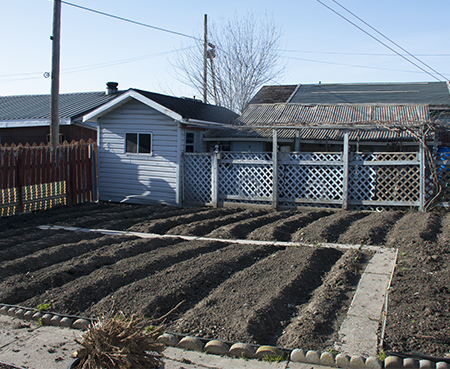 My 91 year-old father plowed the entire back-yard, (The image shows only half of the garden.) cut down a 20-foot tall plum tree and is now growing tomato seeds in the small sun-room. And his latest medical issue – giant cell arteritis – hasn’t slowed him down any.

The trip up was easy – guess Good Friday means the airports are not too busy. The flight from Pittsburgh had some 30 passengers, but the flight to the Sault was full.

This was a trip I was supposed to have done back in March – driving to Toronto and then flying up to the Sault, but the unexpected snow-storm put off driving the New York Throughway. It took three phone-calls to Porter before I got an agent who was able to figure out a new itinerary that wouldn’t cost me a fortune. He kept parts of the original Toronto/Sault ticket and just added a new return date and a Pittsburgh/Toronto leg to the reservation. The whole change-package cost me $100 more than the drive-and-fly trip I had originally planned.

This is not my favorite time to come up north; the region can still be in the grips of cold weather, the left-over snow-piles can look like mountains of filth and the sand that was used on the ice-covered roads can swirl into eyes and ears and noses. But the weather isn’t extreme; the dirt speckled snow-piles are almost melted; and the sand has been cleared away. (They’ve had a lot of rainfall and this helped clean the streets of sand-powder and blackened ice-chunks.)