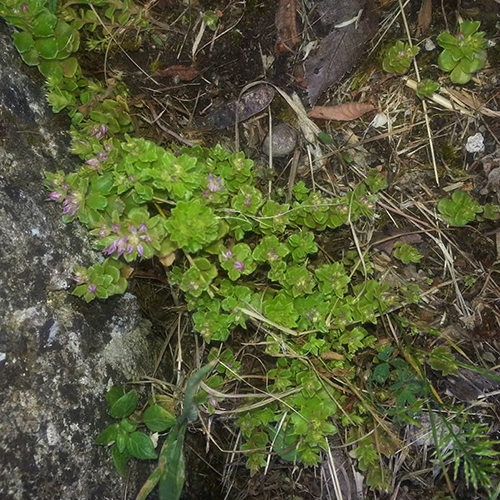 This post began life last week when Lucy Gagliardi, a FB-friend from Aprigliano, posted about the Feast of the Ascension on Thursday, May 25. She explained the old Apriglianese tradition of collecting a furtunella – a good luck plant – on your way home from Ascension Thursday Mass. As a kid, I remember collecting the plant and bringing it home for my mom to hang on a nail on a wall in our kitchen.

I spent most of the week trying to identify the plant known in dialect as a furtunella. Lucy sent me a picture she took with her phone, and Maria Lucia Le Pera posted the image on the left.

The references I found on google.it were under the title l’erba dell’ascensione – grass of the Ascension. And that made sense – generalizing the legend and linking it specifically with the Feast Day. The research placed the legend of a plant, collected on the Feast of the Ascension, and bringing good luck, to the towns and villages of central Calabria; and identified the plant was a succulent belonging to the sedum group. Google images along with Lucy’s and Maria’s pictures helped me narrow down the varieties in the group to sedum stellatum.

The most surprising finding was that the plant was a succulent. That had never crossed my mind, but once I thought about it, it made perfect sense. Calabria is dry and desert-like; succulents would be common wild flowers in that environment.

According To My Cousin Annarita Femia

A furtunella is a plant with soft pink odorless flowers.

It’s said that if on the feast of the Ascension, you pick a bouquet of it and hang it on a wall,

and if during the following days it blooms and branches up,

then good luck and good fortune will come to that home and that family.