I went out my front door, with the camera on a tripod and just shot up at the moon. Also, I did nothing to the image in Photoshop except to crop it. 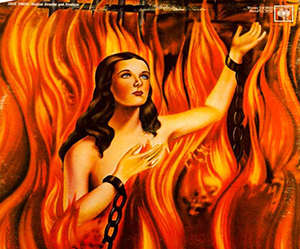 Fifty years ago, the album – Song of Leonard Cohen – was released. On the back cover of the album is a Mexican religious picture of the Anima Sola (Based on Roman Catholic tradition, the Anima Sola or Lonely Soul is an image depicting a soul in purgatory, popular in Latin America, as well as much of Andalusia, Naples and Palermo.) depicted as a woman breaking free of her chains surrounded by flames and gazing towards heaven. In a Rolling Stone interview, Cohen described the image as “the triumph of the spirit over matter. The spirit being that beautiful woman breaking out of the chains and the fire and prison.” Cohen found the picture in a botánica near the Hotel Chelsea in 1965. The album’s front cover depicts a sepia tint photo of Cohen credited to Machine.

The first two LPs I ever bought were Gordon Lightfoot’s first album – Lightfoot! – released in January of 1966 and Cohen’s debut album – Songs of Leonard Cohen – released on December 27, 1967.