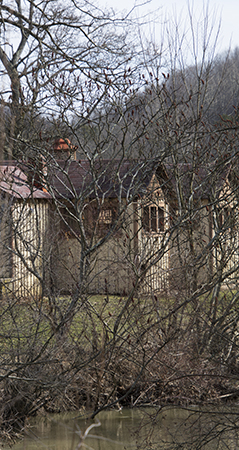 North Park was full of people and cars. I forget that there are many for whom a car-ride, on a nice day, is an outing. Why walk or jog when you can sit in the comfort of your monster-car and see the sunshine, see the walkers, see the joggers through your tinted windshield?

I hiked up Walter Road and walked the western half of Lake Shore Drive for a total 2.8 miles with a 70 feet elevation.

The photograph on the right is deceptive. I noticed the structure and the creek through the bare trees and decided that I could configure an image that would look rustic, remote, romantic. Didn’t realize it would also has an appalachian feel to it.

The structure, built many years ago, has been re-purposed as a concession stand and bathroom facility.

Today’s record-breaking temperatures and the 11 hours of daylight can cause deadly damage to dormant trees. A heat spike, followed by a week of above normal temperatures can start the sap running. And where that sounds promising and spring-like, running sap can turn lethal in a cold-spell. Trees running sap will die if the mercury drops below freezing. (In 2014, we had similar temperature aberrations that caused the sap to start running before the last frost date for Western Pennsylvania. That year, throughout the region, thousand of trees were lost – died when the running-sap froze. I lost the two huge fig trees.)