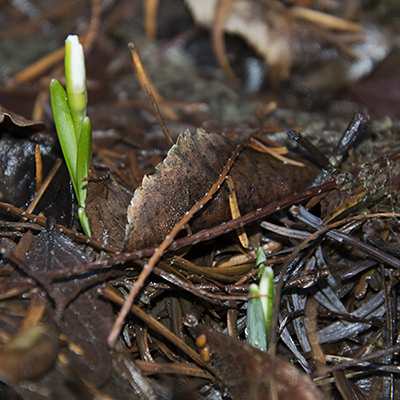 These appeared between yesterday afternoon and this evening. When I went looking for first shoots yesterday, the flower-bed was awash in wet rotting leaves; tonight, as the sun was leaving the western sky, I went looking again and there they were – the first shoots, the messengers, the heralds of spring.

This is also the beginning of the extreme-period – the last hurrah – that ends a season. (If only the same process spilled into the political arena, we could wake from our winter of discontent.)

It’s been a whirlwind of sunny/warm, windy/chilly, rain/close. And this turmoil will probably continue through March, expiring with the showers of April.

The first post on snowdrops is dated March 13, 2011 – le bucaneve – and I titled the post with the wonderful Italian word for these heralds of spring. (bucaneve is literally translated as puncturing through the snow.)