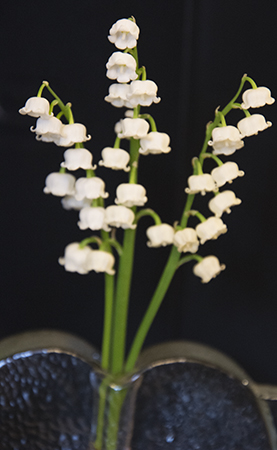 lilies of the valley & sophia loren

Rather than photograph the fleur-de-lis  in the patch, in the back-yard, I decided to stage a more dramatic shoot. The lilies are in front of my black computer tower in a one-flower, heart-shaped, glass vase.

Also, I needed a segue from the posts about Northern Ontario to images and writings about the routines of daily life here at home. And here in Western Pennsylvania, the spring bulbs, the tree blossoms are done; and it’s now time for the lilies, the wisteria and the annuals.

Back in March, Franchino had given me a bunch of Dylan albums to listen to. (He’s taken on the job of educating me on his unparalleled fav – Bob Dylan.) And listening to The Freewheelin’ Bob Dylan was one of the highlights of last week’s road-trip.

It’s only my second time listening to an entire Dylan album. (The other Dylan album I’ve listened to is Tempest.) I had no idea that some of his best compositions and best-known songs – Blowin’ in the Wind, Girl from the North Country, Masters of War, A Hard Rain’s a-Gonna Fall, Don’t Think Twice, It’s All Right, Bob Dylan’s Dream – were on that 1963 album. (Freewheelin’  is Dylan’s second studio album; and eleven of the thirteen songs are original compositions.)

The album cover is a photograph of Dylan with his girlfriend Suze Rotolo. It was taken in February 1963 by CBS staff photographer Don Hunstein at the corner of Jones Street and West 4th Street in the West Village.

But it was the last song in the album – I Shall Be Free – that had me howling. I was at the Thruway toll at Buffalo, laughing hysterically at Mr. Dylan’s surreal lyrics.

Well, my telephone rang it would not stop
It’s President Kennedy callin’ me up
He said, My friend, Bob, what do we need to make the country grow?
I said my friend, John, Brigitte Bardot
Anita Ekberg
Sophia Loren