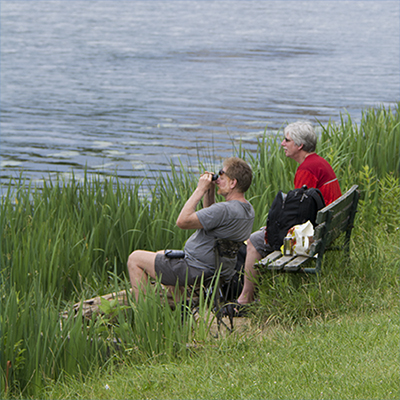 how terribly strange to be seventy

Lately, I’ve been thinking a lot about my generation; its unwillingness to accept the fact that we’re old; its belief that to wind-down or slow-down is tantamount to surrender; its refusal to stand aside and let the next group come to bat.

And why should we? There’s a 72-year old in the White House who insists that he’s full of vigor; many of my contemporaries, who find themselves alone, are rushing into new romances; and even as we scoff and deride the modern world, we are bathing in its comforts and perks. (i expected something different from a generation of daydream believers and homecoming queens, really)

So, what brought on this introspection? The new car has Pandora and I’ve been listening to old songs from the 60s and 70s. OMG, some of them are embarrassingly trite and stupid.

The image is from the many I took when walking around North Park Lake. I saw the two guys and immediately thought of using the photograph for a post about friends on a park-bench. (the image is a detail of the larger wide-angle shot – i pretended to focus on the boat-house and the lake in order to not alert or disturb the guys) The subject is unusual, in that most people in the park are walking, jogging or fishing; they are the first two people I saw just sitting, enjoying the evening calm. And they seem the right age and the right shape to fit into my musings; also their idleness gives me hope that my generation may not be as far gone as i feared.