Today, House Minority Leader Nancy Pelosi and Senate Minority Chuck Schumer met with the President and Vice President to discuss a proposed wall on the southern border and whether Trump would, in fact, shut down the government if he doesn’t get the cash he wants for it. 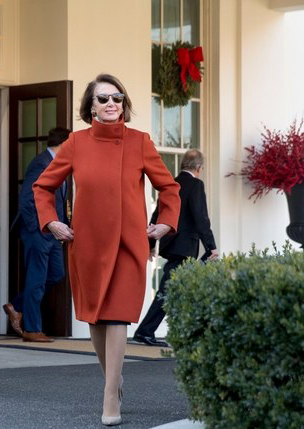 The conversation, which was televised, quickly turned heated and ultimately ended without a compromise, but with the President accepting and owning the possibility of a government shutdown. The Democrats took that as a win.

And as soon as images of Pelosi emerging from the West Wing started making the rounds, Twitter was abuzz at the sight of the Speaker-designate’s power look: the sunglasses, the smirk, the impossibly fabulous rust-colored coat.

Barry Jenkins 1 – And she knew exactly what she was doing wearing THIS coat on THIS day coming out of THAT room, placing THOSE shades on JUST so. This is diplomacy in motion, soft power wielded like a machete through the diligent, decisive act of dressing. They’ve never been JUST clothes.

The New York Times was one of the first to correctly identify the maker of the coat: Max Mara 2. This wasn’t fresh-off-the-runway, just-hit-stores Max Mara, though, Pelosi’s burnt-red style dates back to 2013.

Ian Griffiths, the creative director of Max Mara, issued a statement on the Pelosi sighting too: “You develop an emotional relationship with a coat like nothing else in your wardrobe. I can imagine why Ms. Pelosi chose to wear it for this important moment, and I’m honored.” 3

Barry Jenkins – What I love about this coat is what it says about the supposed impotence of fashion. From the asymmetrical front to the high collar, the strong yet unstrained shoulder and, of course, that COLOR — a deeply serene yet emphatic & ravishing color. This look kicks soooo much ass.

And it kicked HIS ass.


1 Barry Jenkins is an American film director, producer, and screenwriter based in Los Angeles. The quotes are from his Twitter account.
2 Max Mara is an Italian fashion business. It markets up-market ready-to-wear clothing. It was established in 1951 in Reggio Emilia by Achille Maramotti.
3 Nancy Pelosi’s Red Coat – by Ana Colón at Glamor Magazine (excerpts)