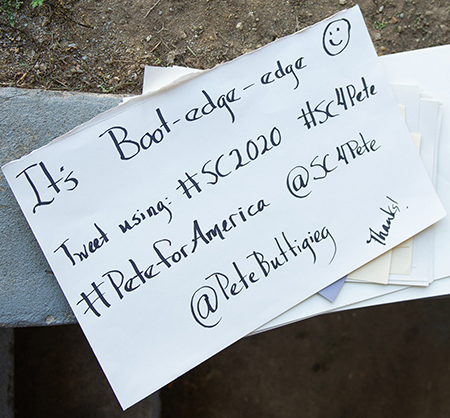 By Trip Gabriel
• March 28, 2019
ROCK HILL, S.C. — Somewhere between Pete Buttigieg being mistaken for a teenager making a promposal, and answering a question in Norwegian, and proclaiming that it was millennials’ turn to lead “at the highest level,” South Carolina got a crash course in a new Democratic celebrity.

Mr. Buttigieg, the 37-year-old mayor of South Bend, Ind., drew large, enthusiastic crowds in his first campaign visit to the early-voting state over the weekend. That followed a series of well-received appearances on national TV, which have helped fuel his new popularity: An Iowa poll on Monday showed him jumping to third place in the 2020 caucus race, and a Quinnipiac national poll on Thursday showed him rising to fifth and tied with Senator Elizabeth Warren.

“This was supposed to be a little meet-and-greet Q. and A.,” he told hundreds of people in a college gym in Rock Hill, after his event was bumped from the library to accommodate a wave of RSVPs.

Many Democrats have drawn impressive crowds early this presidential cycle, a reflection of Democrats’ pent-up desire to defeat President Trump. But Mr. Buttigieg, a Rhodes scholar and a veteran of the war in Afghanistan, was largely an afterthought in a field of much better-known hopefuls. His national TV appearances built on an online following he developed with detailed, earnest and sometimes personal answers at events in Iowa and New Hampshire this winter, and his outside-the-box progressive stands on some policies.

After a 40-minute CNN town hall on March 10, a surge of donations led him to crack the threshold of 65,000 donors to qualify for the first Democratic debates in June. The Emerson Poll in Iowa showed Mr. Buttigieg hurtling to third place, behind former Vice President Joseph R. Biden Jr. and Senator Bernie Sanders — up from a January poll that showed him at zero. (The poll’s margin of error for the Democratic caucus was plus or minus 6.2 percentage points.)

At a check-in table in South Carolina, a sign clarified a question still hovering over the candidate: “It’s Boot-edge-edge,” it read.

Ideologically, Mr. Buttigieg is a progressive — sometimes an adventurous one, calling to expand the Supreme Court and abolish the Electoral College. But his main themes are generational change and winning back Rust Belt voters who supported Mr. Trump.

“I think there’s still an attitude in some parts of the party that what we have to do is find the final proof that Trump’s a bad guy and show it to everybody,” Mr. Buttigieg said in an interview. “What it misses is there’s a lot of people where I live who were under no illusions about his character. They already get that he’s a bad guy, but they made a decision with their eyes open to vote to burn the house down.”

Mr. Buttigieg’s prescription for winning back the white working class is hardly revolutionary: He emphasizes traditional Democratic priorities like health care and education, while assuring voters without a college degree that they can thrive in a changing economy, rather than promising a restoration of the past.

In South Bend, a city that was in long decline after Studebaker shut its auto plant in the 1960s, Mr. Buttigieg bulldozed vacant buildings and invested in infrastructure, which led to a revived downtown and a stabilizing population after decades of flight.

Mr. Buttigieg, who is openly gay and married, is the first to admit his candidacy is a long shot.

His friend David Axelrod, the former political strategist to President Barack Obama, called it a “way, way uphill battle,’’ adding: “One of the realities is that he is a new-generation candidate and now Beto O’Rourke is in the race, and Beto fills a lot of space. They’re fishing in the same pond, and Beto has a larger fishing pole.”

In the interview, Mr. Buttigieg declined to contrast himself with Mr. O’Rourke, the former Texas congressman, who is a decade older. The closest he came was a possible backhand dig when asked how the mayor of a city that ranks 299th in size is qualified to step into the Oval Office.

“If I were the 299th most important member of Congress, I’m not sure I’d be getting that question,” he said.

Aaron Olson, 40, a voter who heard Mr. O’Rourke the day before attending a Buttigieg appearance in Columbia, said Mr. Buttigieg was more policy-grounded than Mr. O’Rourke, who admits to working things out in real time.

“I think Pete Buttigieg is more down to brass tacks,” Mr. Olson said. “He’s more calm and reasoned. I think Beto has a dance track going in his head when he’s speaking.”

Mr. Buttigieg likes to say that as a two-term mayor, he has more executive government experience than either Mr. Trump or Vice President Mike Pence had on taking office. The contrast with socially conservative Mr. Pence, a former Indiana governor, comes easily to Mr. Buttigieg; on CNN, he wondered how Mr. Pence became “the cheerleader of the porn-star presidency.”

In 2015, Mr. Pence championed a “religious freedom” law that critics said let businesses discriminate against gays and lesbians, in the same year that Mr. Buttigieg came out as gay as he was seeking re-election. The fact that he won with 80 percent of the vote encourages Mr. Buttigieg about his prospects in the primary.

Still, if he becomes his party’s nominee, he would test whether Americans are ready for a president holding hands with his husband in the White House Rose Garden.

“Well there’s one way to find out for sure,” said Mr. Buttigieg, who married the former Chasten Glezman, a schoolteacher, last year.

At rallies Mr. Buttigieg’s framing of his sexual orientation plays to Americans’ embrace of strong families and equality, and it is one of his biggest applause lines.

He recalls how his husband was at the bedside of Mr. Buttigieg’s mother when she needed triple bypass surgery. “He could be there in the hospital because in the eyes of the law, just as in my heart, he is a member of my family,” Mr. Buttigieg said in Rock Hill.

Voters at his rallies said his sexual orientation was either a nonissue or perhaps an asset that helps him empathize with other groups that have faced discrimination.

“There isn’t anybody in the United States that doesn’t have a relative or a friend who is of that persuasion,” said Mary Darr, 86, who had driven from Georgia to hear him. “It doesn’t make any difference.”

Mr. Buttigieg, whose father emigrated from Malta, is the son of two former Notre Dame professors. His resume is comically overstuffed. In high school he won a national essay contest (about Senator Bernie Sanders, no less) that led to an internship with Senator Ted Kennedy.

After notching degrees from Harvard and Oxford, and a stint as a McKinsey consultant, he returned to his economically battered hometown to be elected, at 29, the youngest mayor of a midsize American city. He took a seven-month leave for active duty as a Navy Reserves lieutenant in Afghanistan.

Somewhere along the way he taught himself to read a favorite author in Norwegian, which is how journalists from Norwegian media turned up in South Carolina to ask him questions in their own tongue.

The crowds at his South Carolina events featured as many voters with gray hair as millennials. The impression that he might be in need of a prom date came Saturday morning when he was door knocking with a young female statehouse candidate and passing teenagers asked if they were making a “promposal video.”

In a state where 60 percent of Democratic primary voters are black, there were not many African-Americans in Mr. Buttitgieg’s crowds, even at historically black Clinton College, where he packed the gym in Rock Hill.

“I like Mayor Pete, I think he has tremendous potential,” said Anita Nelam, a black Democratic activist in Columbia. She said Mr. Biden was her favorite, an endorsement pinned on her Twitter feed. “But I don’t know what Joe Biden is doing,” she said. “I think having somebody from the Midwest is going to make a big difference for the Democrats.”

“What Joe and Mayor Pete bring to the party is someone who could speak to those folks in a way they can be heard.”