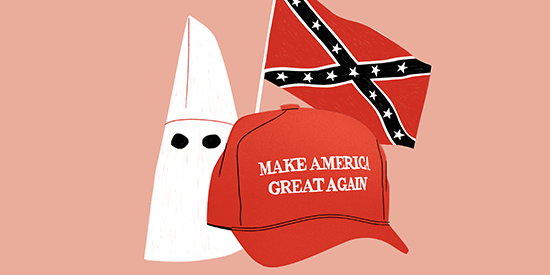 The “Make America Great Again Hats” synonymous with supporters of President Donald Trump will one day carry the same shame as the uniforms worn by the Ku Klux Klan, according to scholar and Washington Post columnist Matt Sears.

In a conversation with Salon published Sunday, the long-time Trump critic said the caps would be a shameful secret for Trump supporters in future that relatives would look down upon.

Sears was responding to a question posed by Salon reporter Chauncey DeVega, who asked whether Trump merchandise would in future be thought of in the same way as Nazi paraphernalia now.

“I think it’s similar. But I think a better analogy would be like finding a Ku Klux Klan hood or robe,” Sears replied. “I’ve made the comparison before. Every time I watch a documentary about the civil rights movement and all the hateful violence they faced I wonder what the white people who were doing those horrible things were thinking. What was going through their minds?”

“We are living in an era with Donald Trump and the Republican Party and the right-wing movement in America where things of similar gravity are happening,” he added. “It’s our job to not be the people who stand by idly and let mobs harass black kids who in an earlier era not too long ago were trying to go to newly desegregated schools.”

“In a few generations from now, finding a MAGA hat in your grandparents’ closet would be like seeing your grandfather’s or grandmother’s face in one of those lunch counter photos, harassing the black people who are trying to fight Jim Crow and win their equal human rights.”

Sears is not the first to have made comparisons between Trump merchandise and Ku Klux Klan uniforms. Actor Alyssa Milano drew the fury of conservatives last month when she declared the MAGA hat to be “the new white hood.”

Milano was reacting to the emergence of a video showing a group of MAGA cap-wearing students from Covington Catholic High School apparently harassing a Native American man at a rally in Washington, D.C. More footage later emerged casting doubt on the media’s initial interpretation of events.

Speaking with Salon, Sears repeated his past criticism of MAGA hats and their users, stressing that the merchandise denotes a very specific set of intolerant ideas, of which Trump supporters are well aware.

This is a lesson we need to consider when looking at the Washington incident. That the boys were wearing MAGA hats and other Trump apparel — and allowed (if not encouraged) by their chaperones to do so while at the March for Life — constitutes a deliberate political act and a deliberate provocation. In our current context, it is impossible to separate the MAGA symbol from anti-immigrant and anti-minority views and policies. After all, what could “make America great again” mean other than returning America to its “ancestral constitution,” in which those like Phillips didn’t have a voice?

Will we ever agree on what exactly happened on the Mall last week? Probably not. But by proudly displaying their MAGA hats, the boys of Covington Catholic presented themselves as embracing a set of exclusionary ideas. It is absolutely fair and rational to take their own self-presentation seriously. 2

“The entire sentiment of ‘Make America Great Again’ implies that there was a time when America was great and it’s not any longer,” he said. “If you look at the reasons that Trump and his movement actually believe (and often explicitly say) that American is not great any longer, it’s because there’s now too many non-white immigrants.”

“America for Trump and his supporters is no longer great because black people have too many rights or there are too many women in the workplace.”

“Trump and his MAGA hats and slogans and policies are also connected to things like the Muslim ban, building the wall, calling Mexicans rapists and saying the terrorists are crossing into the border among these caravans from Guatemala,” Sears continued. “The obvious conclusion is hard to escape. It takes a certain kind of willful denial and willful ignorance to wear a MAGA hat and assume that you’re not conveying all those values and beliefs.”

“I hope there is a future in which the MAGA hat is looked down upon and that political and social matters in this country do not worsen and escalate,” Sears concluded.

Some conservative commentators have defended the MAGA hats against suggestions they have become a symbol of hatred. In January, Fox News host Laura Ingraham said the association has been conjured up by the Democratic Party and the media “to brand an entire belief system as immoral, evil, toxic, and of course it’s racist.”

Ingraham called on Trump supporters to keep wearing their hats, and while doing so to “be sure to show everyone around you what true tolerance, kindness, and inclusiveness looks like.”