..
I used to live in New York City; everything there was dark and dirty. Outside my window was a steeple with a clock that always said twelve-thirty. 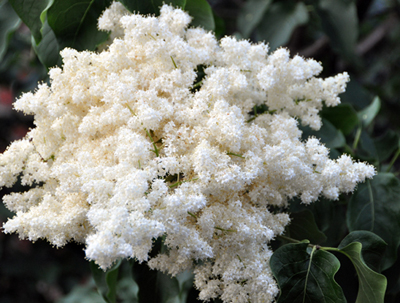 Outside my window, here in Pittsburgh, are the corporate towers of the Golden Triangle. At one time this city was the gateway to the west. It was at the confluence of the Monongahela and the Allegheny that Lewis and Clark began their great adventure. Later the city became the industrial heartland of a continent preparing for war. In the 50’s and 60’s it took its place among the corporate elite and later still it re-invented itself into the Paris of Appalachia, the City of Bridges. Its new colors are sustainable-green and finished-steel blue.

Outside my back-porch is the beautiful Japanese Lilac of the above picture . For a week, every spring, it blooms in glorious clean-white. The new Pittsburgh moves through its seasons, its hours in monastic rhythms. Its sports teams announce the seasons; its church bells the hours. And the hollows and rivers celebrate its neighborhoods.

Young girls are coming to the canyon and in the morning I can see them walking. I can no longer keep my blinds drawn.

In New York City, I could never figure out my geographical boundaries. I don’t know if it was the immensity, the canyons that hid the sun, the silence, the traffic chaos, the windows that would not open, but I always felt at loose ends – where did I belong? If I walked too far east on Flatbush would I still safe? Where did Park Slope end and Bed-Sty begin? I never figured out how to use 8th Avenue, Grand Army Plaza and Prospect Park to define my neighborhood. In Pittsburgh, I know where I belong – the Mexican War Streets, the North Side. I know the boundaries. Friends remind me that it’s the topography that gives me the boundaries I like. I think it’s my reptilian brain remembering the hills and mountains of Calabria.