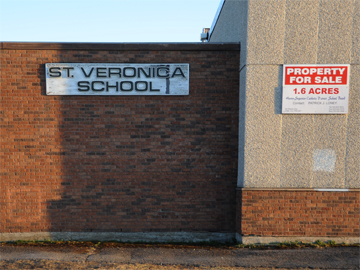 The present building has no windows, no classroom doors to the outside, no immigrant children making new friends.

In June ’63, my family moved to the West End and for 8th grade I had to go to St. Veronica’s. It was an old school building. Each classroom had its own door to the outside; the exterior wall was mullion windows; and for the first time ever, I had a nun teacher – Sister Drusilla. It’s also the school and the part of town where I met – Frank, Ron and Rainer – three of my lifelong friends. 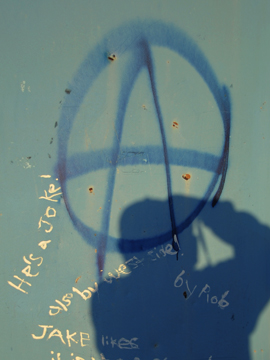 A memory is of the four of us playing basketball on the outside court on a Saturday morning and my looking up and seeing the hills golden and crisp with fall. It’s an image still running through my synapses.

It was here we played football and baseball, watered the ice rink for hockey and waited with baited breath while they build a small gym on the creek side. (We got to use it once or twice before we graduated and left for St. Mary’s College, never to use it or visit again.) And it was in our eighth grade classroom that on November 22, a Friday afternoon, Sister Drusilla announced that President Kennedy had been shot.

Fifty years later, the walls are streaked with graffiti, home-plate is littered with broken glass, and chain-link perimeters the creek. The fields and the old-school are waiting for the bulldozer, for the children now grown to visit one last time.