Grenadier Pond is in the south-west quadrant of High Park and also forms the Park’s south-west boundary. Frank and I walked the trail from the baseball diamonds and hockey rink down to The Queensway. (Naturally I went on about the British nomenclature that still lingers in Canada. Grenadier Pond, how much more British can you get? Oh, I forgot The Queensway, the QEW Expressway, The Kingsway.) The Pond was a pleasant surprise. The woman in the picture is taking a picture of the ducks with her cell. 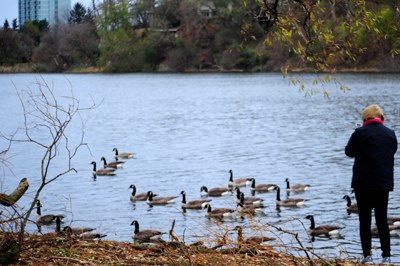 On the opposite shore and up the embankment sat a line of upscale homes – the houses of Grenadier Heights. This neighborhood, south of Bloor is one of the fancy west-end enclaves. High Park is surrounded by quiet, upscale neighborhoods. Also a surprise was the supposed safety of the park. (In America many urban parks are bordered by unsafe neighborhoods. And the parks are scary along these boundaries.) The people we saw on the trails all seemed, like us, out on an afternoon walk. (Toronto is such a diverse city. I really enjoy the mix.)

My grandparents lived north-west of the Park on Jane Street. (In those days, Italians did not live in this part of Toronto. My grandparents were the only Italian immigrants in this German, English section of town. In recent years, Czechoslovakian immigrants have taken over many of the stores along Bloor.) I remember my mother and I walking from Jane, down Bloor to the Park. (My grandparents were very proud of their proximity to High Park.)