and the years are rolling by me … i am older than i once was, younger than i’ll be

I started traveling to Toronto on my own, back in the late 60’s when I was in high-school. (There’s a picture of me, a very young man, at the Sault Ste Marie airport with my tennis-racket heading out to Toronto. Frank and Ron are there to see me off. It’s dated June 24, 1967.) In those days, I was going back and forth getting my paperwork ready to enter the monastery. One of the trips was to take a psychological. 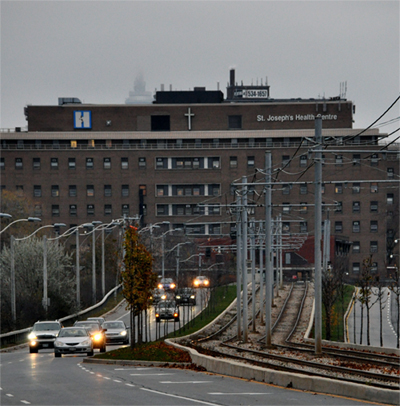 I always stayed with my grandparents when I went down. Brother Lucien would come get me at my grandparents and take me to the Christian Brothers’ Motherhouse in Scarborough for the various interviews and form filings. (Back then Scarborough was farms.) My grandparents lived in Toronto’s west-end and the Motherhouse was in the eastern reaches. To get there we would drive the Gardiner Expressway and pass St. Joseph’s Hospital. The hospital became one of the mile-marker I used to teach myself where I was on the Gardiner. Another marker was the TipTop billboard and a third was the Canadian National Exhibition gate.

Those were my Simon & Garfunkel and Dylan years, when Sound of Silence, Scarborough Fair, The Boxer and Blowing in the Wind gave words to my thoughts. And I assumed that once I left for the monastery, I would never see Toronto or Canada again. I would live my life in America. Not true. I left the Brothers after 6 years but I’m in Toronto on a regular basis. And now, when I’m alone and driving the western leg of the Gardiner, it’s not unusual to turn on the old music and remember another time when – I was so much older then, I’m younger than that now.

This afternoon, Frank and I went walking through High Park and we ended up down on the Queensway – the road in the picture. And there in front of me was St. Joseph’s Hospital – the same grey-brown facade, the same squat structure. I never knew where to situate it, because it was something I only saw from the Expressway. Now I knew where it fit. Actually I came away from the weekend feeling like I understood Toronto’s west-end. I have a picture of it in my head; I know where buildings stand; where streets and avenues intersect; where the indoor tennis-courts sit.

after changes upon changes we are more or less the same