A Brother and A Sister – Gabriele Vigna and Giuseppina Vigna 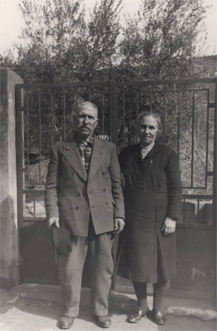 Gabriel is the messenger, the angel of the Lord. Hail, full of grace, the Lord is with thee.

In old Apriglianese, Gabriele became GRABIELE. It took me years to drop the R-sound at the beginning, but if I’m talking with my parents and we mention the Vigna family – Za Peppina or Zu Grabiele – the R goes right back.
Zu Grabiele’s first grandson was named after him. And we still refer to him using the old dialect. Just as I’m Marruzu, he’s Grabiele.

My youngest sister was supposedly named Giuseppina because she was born on March 19 the feast of St. Joseph. My mother also told me that she was happy to name her youngest child Giuseppina because it was the name of her best friend’s daughter, who also happened to be Zu Grabiele’s grand-daughter. But our Giuseppina allowed only her mother to call her Giuseppi, the rest of us called her Jo’. Would she have become Peppina in her old age?

the grandchildren – the nephew and niece