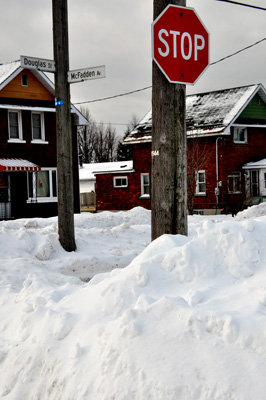 The British live on in Canada – today is Boxing Day. (By the time I got up, Ciccio had taken down the two extra tables and set them by the stairs. I got Christian and Clay to take them back out to the garage.)

Because the sun was out, I decided to take a walk to St. Veronica School. (It’s funny how my one year at St. Veronica’s – 8th grade – is a stronger memory than any of other elementary school experience.) I followed the route I used when going to school in the winter of 1964. In the fall, I would go through the wooded lot between Douglas Street and the school then known as the bush, but in the winter I would use the streets.
The pic is of the corner of Douglas Street and McFadden Avenue. Ron lived on Douglas, in the house on the right. (Much of the housing stock that was there in 1964 is still there. Newer houses fill in the lots that were empty back then.) Growing up, Ron’s house was the place we would all hang out at. It was where we would meet in the morning to decide what we were going to do. Frank lived at the end of McFadden.

I didn’t crop the image, because I wanted to show the snow. The banks were easily 5/6 feet high.