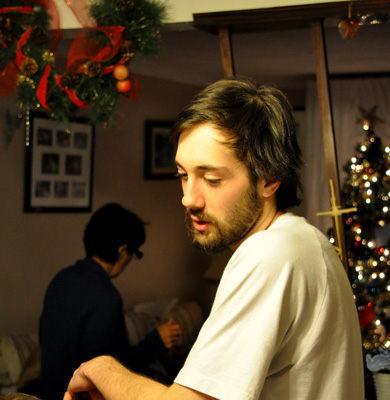 At dinner my dad got sick, because he ate a bad clam. (I never eat their non-Italian food. I believe they should stick to the foods they are familiar with, but then they wouldn’t be Canadian; they would still be immigrants. And in this family the tension between the two cultures is always a fine line that all of us tread.)
Last night, my dad was going on and on about his cousins who spent Christmas Eve at home rather than join their children at a restaurant. Ciccio was outraged at this break – going out to eat on Christmas Eve rather than cook and host all the family – with tradition. I kept saying that it was OK given how much work it was to host a large family gathering.
The bad clam incident led to a memory dump of all the other times that Ciccio inflicted his experiences on the rest of us at Christmas…
There was the time that the neighbors came to wish everyone a Merry Christmas and Ciccio visited with them. They came just as we were getting ready to sit down to eat. The visit got extended and we all left the table hoping that they would get the hint, but Nah, they stayed with Ciccio for at least another 45 minutes. By the time we ate the food was cold.
There was the time when the chimney caught fire just as we were sitting down to eat and Ciccio decided to go on the roof with the hose and sending water down the chimney that was shooting out sparks. The fire department came, made sure there was no chance of fire and left. We all went back in to eat.

The pic is of Christian, with his aunt Connie in the background. He’s sporting a beard. (Connie claims he looks like his nonno when Ciccio was young.)

Connie gave me a new red espresso pot. It will add color to my kitchen.