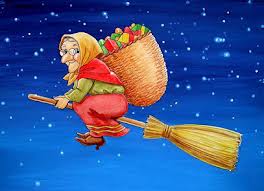 The rhyme tells of an old woman who comes by night, riding a broom and delivering presents. Her shoes are all ripped and she is dressed like the beggars of ancient Rome. And yet, she is cheered. (The image on the left is a sanitized rendering of the old hag.) La Befana was the character that brought us gifts during the Christmas season. There was no Santa in post-war Italy. The late 40’s belonged to the old hag. American culture was still contained in The Lower 48. La Befana came on January 6, the Feast of the Epiphany. The feast commemorates the occasion when the Christ child received his gifts from the Magi.

Before going to bed, on the eve of the Epiphany, I would hang my dad’s sock on the fireplace mantle (His was the largest sock I could find.) and pray that La Befana didn’t bring me coal. Good children got candy, money and small gifts; bad children got lumps of coal. I remember one time when at the bottom of my sock were lumps of coal. My parents laughed and laughed at my reaction, I was outraged. How could the good child get lumps of coal? My mom says that I threw the sock against the wall and cried and cried, insisting that I had been a good boy.

I recently saw a video of a mom and child talking all about La Befana. The best part was the last exchange. Mom asks about Santa and what they had left for him on Christmas Eve. The child answers, “Cookies and milk.” Next, mom asks what they are going to leave for La Befana and the child answers, “A glass of red wine.” My people…