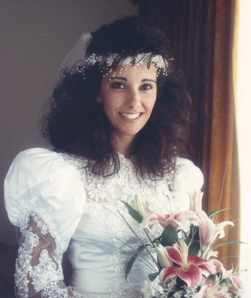 (So what image do I use for this posting? There are many pictures from back in the Sixties when we were all kids in Sault Ste Marie, to images taken three and four months before she died. As you can see, I went with her wedding picture from 1989; the picture with the big hair; the picture with her big eyes.)

On Friday June 29, I drove up for the weekend and got to the house on Arkendo around five. My parents and aunt were also visiting. It had been three weeks since my last trip and what I saw scared me. The cancer had eaten her body. She was skeletal; her big eyes were sunken, clouded; her skin pallid; her speech slurred. She couldn’t feed herself. I sat with her and helped her with the broth. After the simple meal, she tired quickly and Dave and I carefully got her to bed. (We had moved her bed to the first floor, to the dining room.)
I spent the rest of the evening on the couch with the kids – three lost souls wrapped around each other.

Next morning Dave, Ciccio and I were in the front-yard planting a peony. Dave went in to help Jo’ with breakfast. Shortly after, my aunt came down opened the door and told us that Jo’ had died. My dad and I went into the silent house and up to the dining room. I walked to the bed, gently closed her eyes and kissed her.