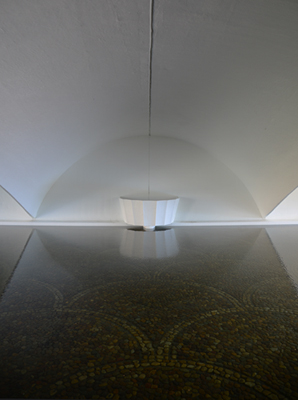 Perpendicular to, and under the land-bridge that connects the Fort Pitt and Fort Duquesne is another bridge, over a reflecting pool, that leads into Point State Park. The pool floor is decorated with a rock mosaic and flooded with fluoridated water. The entrance tunnel is divided into three vaults, and each arc is lit from a base fixture. The image on the left – the Holy of Holies as a Euclidean dream – is the middle arc with its reflecting pool, lighting fixture, back-drop and the seam-line.

Point State Park has undergone a huge renovation – the fountain at the confluence of the Allegheny and the Monongahela rivers was retrofitted, the grasslands in the park were re-sodded and the plantings were weeded and re-stocked all in time for the 2013 Three Rivers Art Festival. Also, the under the land-bridge entrance was rehabbed – plastered, painted and power-washed.

During the Art Festival this middle arc served as a niche for a giant transparent inflatable Buddha – Floating Echo. (The sculpture is the creation of Chang-Jin Lee a Korean-born visual artist who lives in New York City.) The Holy of Holies was desecrated. A rule-religion’s sacred site was violated by a nature-religion’s inflatable god. Floating Echo was worshiped, for 10 days, in this Euclidean sanctuary.