i confess to almighty god, to blessed mary 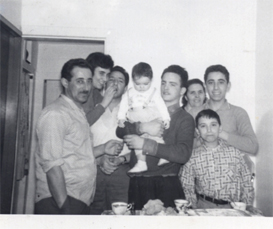 Lately, I’ve been thinking a lot about the kids I grew up with. Renato was one of the Musso children. The photo on the left was taken in 1964. (left-to-right — Ciccio Zinga, the Sirianni – Connie and Frank, Renato holding my sister Jo’, Saveria Musso, Mario and Frank Musso.) The Musso family had recently arrived from Aprigliano. They were from La Grupa the neighborhood that my dad was from. They were his friends, but in Sault Ste Marie they became part of my extended family.

Shortly after their arrival, Lena, the oldest of the Musso children, was engaged and getting ready to marry. Renato immediately went off to work. (He and my dad got along real well. They were young men in a foreign land working construction.) Frank and I were in school. I was at St. Theresa and Frank was at St. Joseph.

Frank Musso and I looked up to Renato, he was the big brother interacting with the world. We would follow him around, listening to his stories; eyes big with wonder. He was the bridge between the world I had left behind and the brave new world that was Canada. He had left the childhood of the school-house behind and was out there in the world of work, in the world of English speaking people. When he came home after a long day, Frank and I listened to his stories. (We followed him around every chance.) He would come home, go up to his room to change out of his work-clothes and we followed hoping for a story. And he would tell us what it was like out there, in those places where we couldn’t go. School seemed so tame, so ordinary compared to his adventures in the adult world. I envied his experiences, his privileged position at the kitchen table. I envied his apprenticeship with my dad, his camaraderie with Ciccio, their easy laugh. 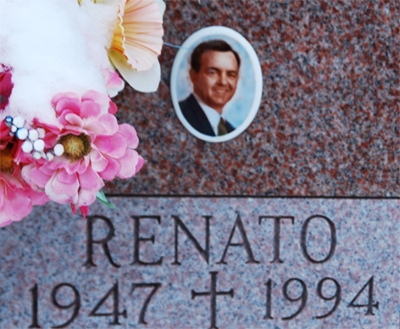 In the last couple of months, I’ve touched base again with Frank Musso, Marisa Sanguinetti and Joe Sanguinetti. We coalesced around the death of Armante Sanguinetti, Marisa’s and Joe’s dad. And today, I went looking for the image I shot of Renato’s grave-marker.

I look at the image on the right and I’m shocked, truly disturbed. He was only 2 years older than me. And at 47, he died of an inoperable, cancerous brain tumor. What the … What am I supposed to do with the big brother memories? How do I understand that he had to be a grown-up while I got to sit in a classroom and draw in my notebook? How do I re-align the remembrances? How do I find empathy for the young man who never got to grow his hair long, never got to go to Uni, never got to sneak a joint?
How can I envy his camaraderie with my dad, their easy laugh?