an iris, some buildings, a park and a hunky 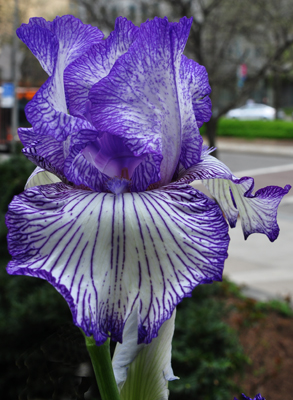 I’m walking the concrete paths through Gateway Center and come upon a group of planters filled with purple iris. Now, it’s way too early for this rhizome, but then the new local restaurant wants to attract customers so why not decorate with these giant flags.

During World War II, city officials created plans to redevelop the dense and blighted forks of the Ohio River into both Point State Park and a gateway of office buildings. It was announced as fully financed on September 21, 1949 when the Equitable Insurance Co. of New York agreed to underwrite the project after securing lease agreements from Westinghouse, Mellon Financial and other major corporations. Eggers & Higgins, architects on the Thomas Jefferson Memorial, were the architects for the first three buildings, One, Two and Three Gateway Center.

Today Gateway Center is one of Pittsburgh premier office complexes and an amazing example of human-friendly urban design. The office complex has an 87% occupancy rate.

Point State Park is located at the confluence of three rivers – the Monongahela, the Allegheny and the Ohio. The park commemorates and preserves the strategic and historic heritage of the area during the French and Indian War.

Once a busy industrial zone, the area had deteriorated into a commercial slum by the 1940s. The development of a state park was authorized in 1945 and the first parcel of the 36-acre property was purchased the next year. The park was completed and dedicated in 1974. The fountain at the confluence-point is one of it’s most spectacular feature. Also in the park are a granite tracery of the original French fort, the Portal – a great archway and entrance to the park under the I376 highway, the Fort Pitt Museum and the Fort Pitt Blockhouse. The Blockhouse is the only remaining structure from the colonial fort. It also served as the western headquarters of the Continental Army during the American Revolution.

In June, Gateway Center and the Point Park are filled with suburbanites, out-of-towners and Pittsburghers as the Three Rivers Arts Festival uses the plazas, walk-ways and lawns to showcase a contingency international and local artists. And many of the best working crafts-people come from across the country and Canada to display their work at the annual event. The 1990 Three Rivers Festival was full of controversy.