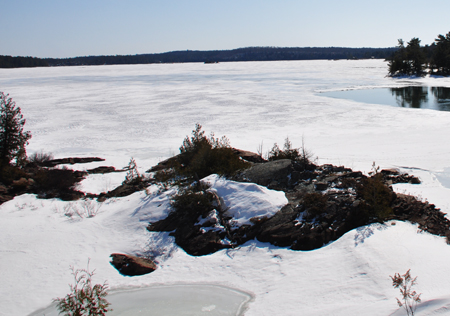 The image is of the north channel. I’m standing on the St. Joe’s Island side of the bridge facing east and shooting towards the mainland – Northern Ontario. The channel has one of the fastest currents in the Great Lakes system and that’s why you can see open water. The other side of the Island faces Lake Huron; this far north, the Lake is a solid sheet of ice.

Easter Monday officially ends the season. In Canada and among the Italian expatriates in Sault Ste Marie, Easter is still a big to-do. My family, minus Mario, the Thormans, Melchiorres and McCaigs, had their Easter celebration at lunch. (My dad couldn’t understand that here in the U.S. the holiday is exclusively religious and not recognized by any government entity.) 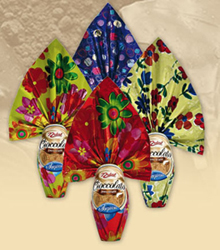 There are two foods that I associate with Easter – the Mylar-wrapped chocolate eggs and the home-made breads with an egg imbedded in the braids. The chocolate eggs were tall, shinny and crinkly; they also had a small toy inside. Ciccio would buy each of his children one of these and give them to us on Easter Sunday. I remember the breads as wonders – because I was too young to understand that the egg cooked while the bread was in the oven, I kept expecting to tap the egg and have it still be raw. My mother still makes the braided Easter bread both the long and the round. However, in post-war Calabria there were no Jimmies to sprinkle on top of the Easter breads. And Mafalda would never blemish her Easter bread with something as American as Jimmies.

I spent most of the today on the road, driving home from Oxford. I left early this morning and was home by noon. Michigan-24 was heavy with commuters heading to their suburban offices, but 75 South and the Ohio and Pennsylvania Turnpikes had little traffic; I was able to maintain a speed above 75mph.