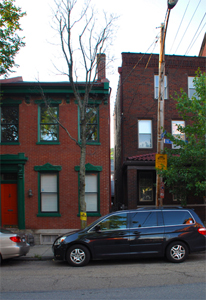 The Pittsburgh Tree Maintenance group is coming tomorrow to cut down the dead maple. There are 3 dead trees on my side of the street that they are probably going to cut down. New trees will be planted either in the fall or next spring.

The maple was here when we first moved to the North Side. The early urban-pioneers to the Mexican War Streets settled for the upright maples or balloon-like Lindens. (I believe the one in front of the house was an Armstrong Red Maple – a fast growing, columnar tree.) The Linden next door – left corner of the pic – hosts millions of aphids and parking under it leaves the car slithered with aphid droppings. The droppings are syrupy and sticky and hard to clean off. The maple in front of my house was planted shallow, but it seemed to be doing OK. However, when we put in the new sidewalk, the contractor trimmed the root-ball and since then the tree started having problems. First a fungus developed on the bark and the next year there were dead branches. The fungus kept moving up the trunk and the branches without leaves increased. By spring 2014, the tree was dead. 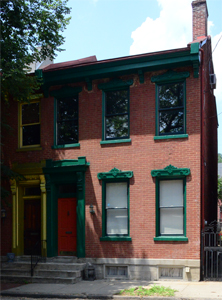 In the last 10 years, all replacement and new trees have been Sugar Maples. The word on the street is that the new trees are better suited to an urban environment. In the above image, the tree on the right in front of my neighbor’s is a Sugar Maple.

Today is Saturday. I came home from work to find the dead maple gone. Interestingly, they cut the tree to ground level, leaving the base and roots. The Tree Maintenance group will replant a new tree in the fall. I wonder what they do about the old trunk and root-ball?

A side note, this post was written over a three day period. The top image was taken after sun down on Thursday, and the bottom pic was shot today in early afternoon, in the blazing sun. (Hate to admit it, but I like the house without the tree in front of it.)