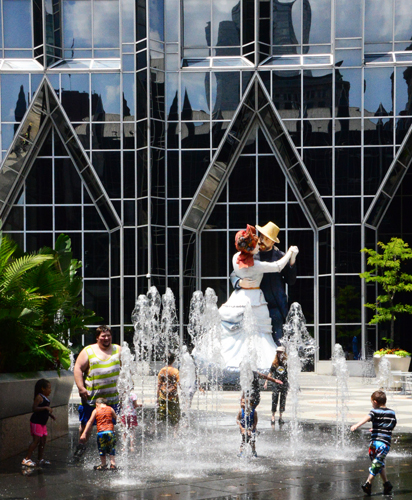 It took three days, a 50-ton lift and a 70-foot flatbed to install Seward Johnson’s statue “A Turn of the Century,” at PPG Plaza. The statue, which has been displayed in other cities, is based on an 1883 life-sized painting by impressionist Pierre-Auguste Renoir, “Dance at Bougival.” Renoir used two of his close friends as models for the piece, which evokes the scene at open-air cafes in the Paris suburb of Bougival. (The full article can be read at the Pittsburgh Post-Gazette.)

I walked into PPG Plaza looking to shoot the installation, but the children running in the fountain and the water-spouts were way more interesting. I came into the plaza from the south-side and started to find the best position to shoot the giant statue. Slowly, I walked around to its north quadrant and there were my renoir figures. I don’t know which I like best, the little boy in the bottom right corner with his ballet-like pose or the dad in all his corpulence. (Auguste would have liked the dad’s massive earthiness.)

The Plaza is one of the great open spaces in downtown Pittsburgh. Designed by architect Philip Johnson and his partner John Burgee back in the early 80’s, the Plaza has finally come into its own. With its compliment – Market Square – the area is Pittsburgh’s new hub littered with glitterati and working people in the day and Millennials after hours.