saturday summers, when i was a kid15th entry – 8th grade 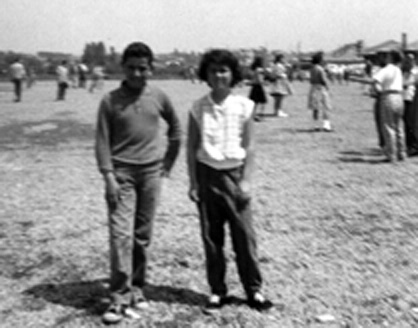 The Paul Stookey lyrics reminded of the summers we spend playing baseball in the field behind Corrine’s house. Baseball was not a game I understood or played well, so right field was the right place for me. Right field extended across the street and into the St. Veronica’s Church parking lot. Still, the ball rarely came in my direction.

The image on the left has little to do with baseball or the field behind Corrine’s, it just seemed to fit. (Janice and I are on the playground at St. Theresa School. I think we were in the 6th or 7th grade.)

I have no idea who provided the ball, the bat, the gloves. For the bases, home-plate and the pitcher’s mound we would trace in the dirt using our shoes to scribe the diamonds and line on the mound.

Ron, Rainer and Frank were good players. Ron and Frank played in the various summer leagues and Rainer and I would ride our bikes to their games. (The bikes were our tickets to exploring the town and we did. Many times Rainer would ride on the handle-bars and the two of us would see how fast we get down a hill.) The league played in fields all over the west end of Sault Ste Marie. My favorites were the ones up on the hills, especially the one on Fourth Line. Fourth Line in those days had little traffic and great dips. We could ride our bikes down the middle of the road and never worry about cars.