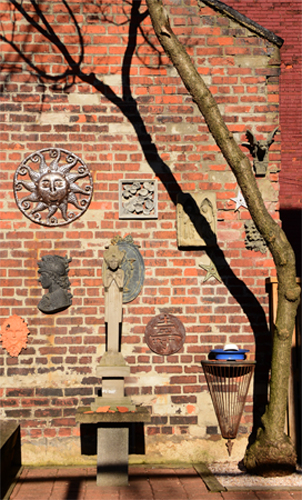 Sunday was the first day of sun and warmth. Brought out the deck-chairs and sat outside after dinner. The fading sky was spring-blue and it was fun to shoot in the backyard. The image on the left is the Japanese Lilac. Last fall I cut a large branch that was at right-angle to the curving trunk. You can see the scar, the folding bark near the top. It’s healing, but I learned to trim branches differently after that tear. I took the hand-saw to the branch without making a first-cut at the bottom. The first-cut would have prevented the heavy branch from ripping off the trunk once I got deep enough. Instead of ripping it would have collapsed on the first-cut and ripped from the top, the part that I had cut with the hand-saw.

I like the shadow of the trunk. It captures the curve more than precisely than the trunk itself.

Kaua’i has always been a time to get ready for summer. I pack and try out any new camera accessories, so that by the time I’m packing for Italy I’ve have a test run. I learned that it wasn’t a good idea to bring only high-end cameras, because if I want someone to take our pic, I can’t give them a difficult camera to use. (Never mind the woman at the Queen’s Bath who was shooting with a Canon but had no clue when I handed her my camera with a fixed lens. She was looking for the zoom. And the pictures she took were useless. The woman who took our picture at Waimea Canyon did a great job and she knew about a fixed lens.) Other years, I got sandals – indoor Crocs and outdoor Keens. This year, I discovered that my runners weren’t the best for walking or trekking the jungle paths. They were too flexible for walking and not flexing enough when walking the lava boulders. I’ve finally figured out that the New Balance products work well for me. (The Merrells look great, but they were terrible for walking around. The summer before last – 2013 – we were walking in Rome and my feet were sweaty, hot and sore. I also had a pair of their original Encore slipons and I had to throw away, because at that time they had no breathing vents and my feet just sweated.) Last summer, we did more walking than I’ve ever done in Italy and not once were my feet sweaty or sore in the New Balance runners. So, when I got home, preparing for Puglia and future trips to Kaua’i, I ordered New Balance walkers and today I got New Balance trekkers. I find I can use the shoes right out of the box with very little breaking-in time. And both the walkers and trekkers have discreet N logos. (I ordered trekkers, because the walking shoes don’t have enough solidity or rigidity for the off-road walking to get to the waterfall at McConnell’s Mill. And I’d like to keep the walkers free of mud and grime, because I want to use them as an everyday shoe.)