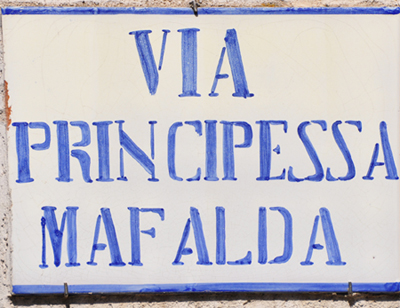 Mafalda di Savoia was born in 1902. She was the second daughter of the Italian king Vittorio Emanuele III. (Rose likes to point out how similar our grandmother’s maiden name is to name of the King of Italy. Our grandmother’s maiden name was S A V A I A.) My grandparents, in 1927, named their second daughter Mafalda. At that time a very popular name. (All the Italians of my parents generation as well as those of my aunt-and-uncles age group, all know the name Mafalda.) But by the end of World War II, Italy was a different place; the monarchy was gone, Fascism had brought the country to its knees and the south was beginning to empty out. The next generation, whether they immigrated or stayed, forgot the name of the old king’s second daughter. I’ve never met anyone else with the name Mafalda. (I don’t remember where we were in Le Marche when someone called to a woman, my mother’s age, and called her Mafalda.)

The street sign is from the small town of Cisternino, one of the three white-cities here in central Puglia.