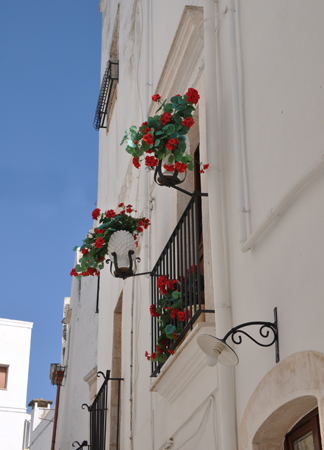 Tuesday and Wednesday we had no upload capability and today for a short time the uploading problem happened again.

This morning we went to the farmers-market in Locorotondo. (The image on the left is one of the white houses in the Medieval town.) The intent was to buy more of the red mushrooms – Lactarius deliciosus – know in our family as risiti. The link takes to the Wikipedia page for Lactarius deliciosus. The following is the entry from the page about wild-mushrooms in Calabria. Lactarius deliciosus – detto volgarmente “rosito” per il suo colore rosa-arancione, è uno dei funghi più noti e ricercati in Sila. (And in the dialect of the Apriglianese, the word became risiti.) Earlier in the week, I bought some risiti at the farmers-market in our area.

When our parents were still going wild-mushroom picking, the risiti were the prized ones, because they’re meaty and have a wonderful flavor. And my Dad would give me some cooked and seasoned in vacuum sealed jars.

When we got back, a great debate ensued about how to prepare the risiti. I suggested – frying them in a olive oil with some small tomatoes to add liquid. Rose and Derrick remembered my uncle preparing them without tomatoes, because they supposedly made their own sauce. I kept explaining that they were a meaty mushroom and released little to no water when fried. In the end we added the tomatoes. They were great over pasta.