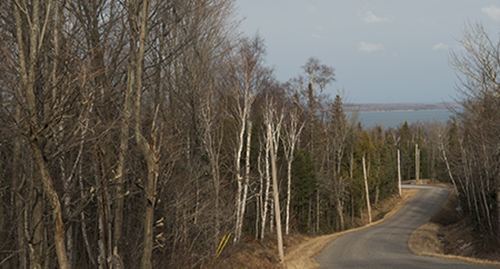 It’s Boxing Day. The term comes from an old British custom. Since servants and tradespeople had to wait on their masters on Christmas Day, the servants were given the next day off to visit family and celebrate the season. The masters/employers would give each servant a box to take home containing gifts, bonuses and sometimes leftover food. And here we are today, celebrating the legacy of reward and recycling; the legacy of Downton Abbey. Aren’t them Brits the best?

I drove out to Connie’s cottage, because I wanted to collect more blue-rocks to put around the base of the Scotch Pine in my back-yard.

The Red Rock area is very close to town and access is straight down Maki Road. Seven kilometers in and the view from this small rise is spectacular. It’s the last elevation before the flats and the lakeshore road with the cottages. It was a spring-like morning and I stopped the car and shot the scene. It’s Lake Superior at the end of the road. On the horizon is Ile Parisienne an island in the south-eastern channel of the biggest and deepest of the Great Lakes. The Ojibwe/Chippewa call the lake gichi-gami  meaning great sea. And Henry Wadsworth Longfellow wrote the name as Gitche Gumee  in The Song of Hiawatha. (The poem is American Romantic literature, not Native oral tradition.)

Connie, Rose, Derrick and I came back to my parents’ for a lunch of left-overs and newly fried shrimp. We were able to convince Mr. Zinga to postpone cooking the shrimp until today. And even then, he had them breaded and fried by 7:00 this morning. (My mother is convinced that my dad believes all food should be served cold.)