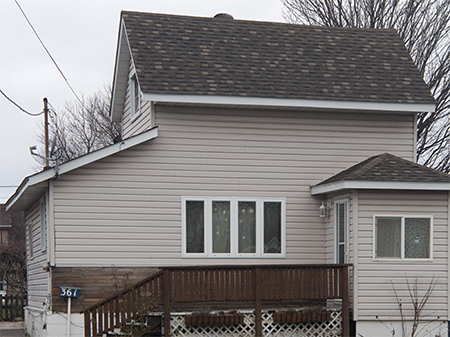 The image on the right is of the house that the Ingribelli family lived in when I was living here in the far north. The family that I knew is all gone. Frank, who was my age, died of an aneurysm when he was in his early twenties. Dave the youngest died of cancer last year. I vaguely remember the dad; he died before I left. The mom was a big woman, but her life was never the same after Frank passed away. The Ingribelli were related to us through my grandmother and I remember visiting in this house. (The house has since been renovated, but my mom had no problem identifying it. I was walking the neighborhood and when I saw the house, I shot it.)

Prepping for dinner and the incessant Christmas phone calls made the morning a whirlwind. At 7:00 am, my dad got a call from his cousin in Pietrafitta. (Pietrafitta is the next town over from Aprigliano.) This made his day. My paternal grandmother and his cousin’s mother were sisters. The two of them are probably the only remaining Capisciolti from that generation. (Capisciolti was my grandmother’s family name.) From there we moved to my father’s obsession about getting the tables brought in from the garage. Knowing how he can get OCD squared during the prep for Christmas dinner, I let him know last night, that Derrick and I would take care of the tables. Forget that, by 9:00am he was in the garage and had taken down the long table and carried it to the side-door. (This is a 90-year-old, riddled with arthritis, hard-headed Calabrese.) It was only my insistence that he stop with the craziness that got any slow-down. Derrick and I had the table down by 10:30 and it sat there until 2:30 when I set it for dinner.

My mother’s version of Christmas anxiety is to tell me to call all her friends’ children. Her friends and their children are people that I rarely see, but that didn’t seem to deter her. I should call all her friends’ children and wish them Merry Christmas. I didn’t. In addition to this hyper sentimentality, let’s not forget her incessant suggestions of things I need or should eat. (The pushing of food lives side-by-side with us teasing Dave to no end, because he has gained weight.)