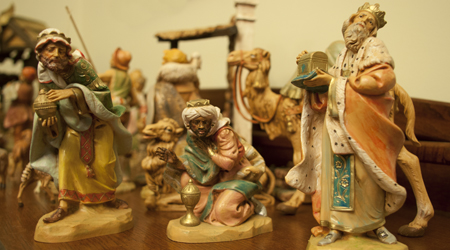 The title is a quote from the poet Omar Khayyam from Reg Henry’s column in today’s PPG. The image is of the three Magi from the presepio Jo’ got me when her friend Pat went to Italy.

Twelvetide – the Twelve Days of Christmas – ends today. But for my relatives and Facebookers in Aprigliano the date marks the feast of La Befana and they have images of the old witch, albeit cute and colorful in her modern incarnation, all over their FB pages. (I want to find out if gift-giving in Italy has moved from the traditional January 6 date, the feast of the Magi, to the more American date of December 25.)

The Legend of La Befana – On the evening of January 5, legend has it that the three wise men knocked on La Befana’s door while looking for the child Jesus. She let them come in, but when asked to go with them to visit the baby, she said she was too busy. Later she regretted her decision and ran out of her house with a broom in hand and gifts for newborn child, but was never able to catch up to the Magi. Today she is still looking for the baby Jesus so she gives all children gifts every eve before Epiphany.

My favorite quote is from my cousin Alessandra – non si è mai troppo grandi per aspettare la befana – the sentiment is that you’re never too old to hang a stocking by the fire and believe that La Befana will stuff it full of gifts. I’m assuming that the image is of her Befana stocking by the fireplace at her Dad’s house. (I particularly like the small, unraveling threads at the bottom of the opening. It must be an old, beloved sock. Wonder if it’s the sock from when she was a child. Is it the sock her Mom and Dad – my cousins Mario e Tonina – hung by the fire when she still believed La Befana brought gifts?) Dag! I remember using one of my Mom’s old socks, because it was the longest and biggest sock we had in the house. It was a plain woolen winter sock. It had no gold thread or fancy embroidery.

Henry’s column is about a long ago time – 1977 – when the first Star War movie premiered; when we were all young enough to believe in gifts and wonder.