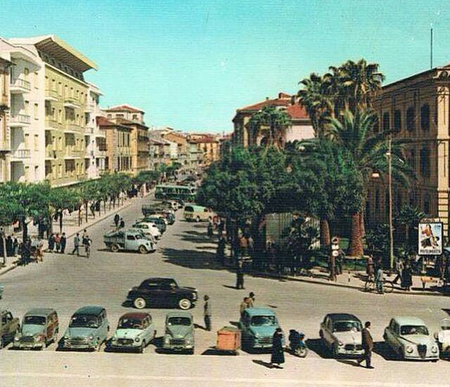 When I see these old images, I think about where I was at the time. In 1959, my family had been in Canada two years; we were still living at my grandparents; my aunt had been married a year-and-a-half – November 30, 1957 – and living upstairs; and I was in 3rd grade at St. Theresa’s. Nineteen-fifty-nine was also the year there was a construction fire down the hall from my classroom, in the new extension. The smoke damage was enough that all students were bused to other schools until the damage was cleaned up. My 3rd class was sent to Sacred Heart Elementary on the edge of downtown. And for the next three months, we had class in the basement gym of Sacred Heart School. There were at least two other classes in the space and portable blackboards were used as dividers between the groups. Imagine 100 kids sharing a large open space and keeping quiet. (I could look under the blackboard and see the shoes of the kids in the other grade.) But lessons went on and we did our work. And because we couldn’t go home for lunch, they fed us. It was my first experience with school lunches. It was all very exotic.

Meanwhile, in Cosenza it was spring and they were walking around in suits; in Sault Ste Marie, I went to school in my winter coat, got on a school-bus and went cross-town to a basement gym. And for lunch, I ate Canadian cafeteria food. Bet my fellow Cosentini had never had Wonder Bread. (I remember being on the train from Montreal to Sault Ste Marie and my dad disgusted with the mushy white-bread they gave us for lunch.) The thought that my fellow Cosentini were eating good Calabrian bread while we gummed the bleached, nutrient-free wonder-food of modern Canada makes me believe in the power of advertising. We left Calabria because of the poverty and because we were told that the streets of America were paved with gold.