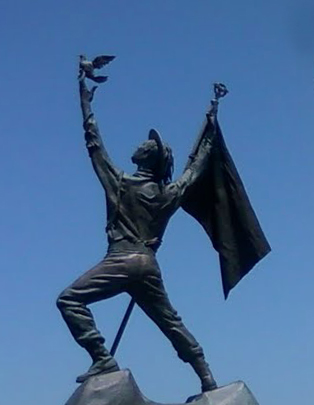 come writers and critics
who prophesize with your pen

and keep your eyes wide
the chance won’t come again

the line it is drawn
the curse it is cast

as the present now
will later be past

the order is
rapidly fadin’

Throughout Italy, every town has a World-War-One memorial. (650,000 Italian soldiers died in WWI.) The term Ai Caduti – to the fallen – is how these monuments are referred to. The image above is the WWI monument in the town of Montegranaro in Le Marche.

The monument and the Great War it commemorates, conjure up two remembrances – one from Season Three of Upstairs Downstairs and one from Robert Graves’ I Claudius.

The son of the upstairs, Edwardian family is talking about enlisting, because the war on the continent is for a noble cause. Also, England is on the cusp of modernity, on the cusp of world domination and her sons and daughters are needed on the fields of France; are needed to vanquish the Beastly Hun. James and his contemporaries run, heads high, naiveté fluttering, to the fields of Flanders.
Claudius is dying so he’s trying to put safeguards in place to protect his young son from assassination and from the coming chaos. But Britannicus rejects his father’s precautions. He and his contemporaries see assassins as phantoms of the old generation. Modern, Imperial Rome is free of boggy-men; the Pax Romana governs the world. And Britannicus believes Nero an honorable man.

But war and revolution destroyed early-twentieth century Europe; and the chaos that followed destroyed the Julio-Claudian dynasty. Europe was plunged into thirty years of war and Rome was choked by internal conflicts, conspiracies and civil wars. The revolutions decimated the societies the previous generation had built; the revolutions unleashed the fires that destroyed the privileged, the poor, the innocent.

I don’t believe in revolutions. History tells me they tear apart rather societies not rebuild them.

I think American is again on the cusp of radical change and again its young believe that they, and only they, understand the modern world. And these Millennials, like their hippie predecessors, believe that a new-world order can only augment their current freedoms, their prodigious privileges. In this rarefied climate, revolution is a noble endeavor, a heart-string longing, a clarion call.

On the right, Trump preaches a society free of privilege, free of minorities, free of women bosses. A white-only, Protestant America ruled by old white men. And his followers insist that if their prophet is denied the nomination in Cleveland, they will bring down the Republican Convention. On the left, the kids and the Hollywood elites have enlisted, by the thousands, in Sander’s revolutionary army. And if their prophet isn’t nominated by the Democratic Convention in the City of Brotherly Love, they will walk away hurling Mercutio’s curse, “A plague o’ both your houses!”

The America their parents built is flawed – a shadow of its former self. The new heralds – the pure Bernie, the virginal Donald – will lead the country out of darkness, out of servitude and into the promised land.

I’m sympathetic to Sanders’ ideas, but their prophet spells out only the positives. The problems – the hard work ahead, the set-backs, Congressional Republicans, an electorate against new taxes, a minority that wants to deport 11 million people – are presented as trifles to be easily overcome. Senator Sanders what about the vulnerable, the displaced that a revolution will produce? Senator Sanders how will you control the chaos we are hurling towards?

The media shows me a Donald Trump, one campaign-stop away from creating his own storm-troopers; a Susan Sarandon proclaims that a Trump win will accelerate the coming revolution. Mr. Trump and Ms. Sarandon will not be touched by the ravages of civil war. They will sit in their towers and watch as the country burns, as women are disenfranchised, as innocents are massacred, as minorities are shoved into transports and driven to the deserts of Arizona and New Mexico.

A Sanders presidency will have to address the chaos, the rage he and Donald Trump have unleashed. I don’t believe Senator Sanders is capable of doing that. Bernie reminds me of the amiable school principal whom the parents all love, but whom staff hates. He cannot manage the teachers who work for him and the work environment is rife with ruinous factions and petty squabbles.

The soldier in the monument is releasing a dove. This is the only Italian WWI monument I’ve seen that suggests peace. Most call forth sadness; many itemize the fallen.

Twenty-first century America is at a crossroads. We are rich; we are fat; we are bored; we are angry. We don’t really care about our children, the poor, minorities, women. We just want to continue sitting in our Lazy-boys, eating chips, watching porn, betting on fantasy football. We just want to buy and buy. In the stock-market, we celebrate the heights our corporations have scaled; in Congress, we celebrate their power; at the mall we covet their products. The new iPhone is only $500. I need it.  Who cares that the corporations, the American worker built, moved their manufacturing to China and their service-centers to India? My new iPhone has a gold back.

No presidential candidate is offering the country a path to moderation, a path to reconciliation.

i wanted magic shows and miracles
mirages to touch