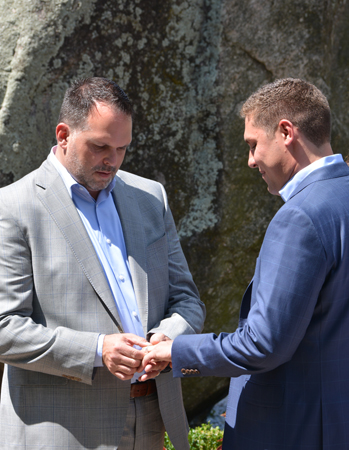 Canada has had marriage equality since July 2005 – eleven years today. Marc and David were married by a Justice-of-the-Peace at beautiful Rosetta McClain Gardens on the south-east side of Toronto.

I’ve never been to this end of town and it was a great surprise. For the longest time, I had no idea where the area, now known as The Danforth, was; then Norma explained that on the other side of the Don Valley Parkway, Bloor Street changes names and becomes Danforth Avenue. With that reference, I knew how to situate the area in my internal map of the city.

Bloor is one of my anchors in my experience of Toronto. My grandparents lived on Jane a couple blocks north of Bloor. And when I visited, my grandfather and I would walk down to Bloor to do the food shopping. My aunt Rita and I went to see the 1968 Planet of the Apes at a movie theater on Bloor. My first ever experience riding a subway began at the Jane and Bloor station. When my parents visited, my mother and I would walk Bloor all the way to High Park. Later still, Jo’ and I came to the west end of Bloor for coffee and dessert. There were some amazing German bakeries in the area. And later still, I remember taking Christian and Seane there for lunch at McDonald’s. And I remember Seane refusing to hold hands when we needed to cross busy Runnymede.

So, taking those old memories and extending them east to The Danforth allowed me to get my bearings. And as I drove to the park for the wedding, I couldn’t help but think old Toronto. The city as I knew it when I visited with my grandparents.

On The Danforth there were no glass spires cutting the horizon; there was no clogged expressway shadowing the streets below it. The neighborhood was full of single-family homes and family-owned business and there were people everywhere strolling, eating, sight-seeing. I saw several community parks with pools and baseball diamonds and tennis courts and playgrounds; I followed the trolley as it rode the rails on Kingston. Where recently I’ve been comparing the modern city to the urban landscapes of Blade Runner, east Toronto is a throw back to a gentler more humane city.

Also, The Danforth has drawn a new generation of gays and hipsters who are gradually turning what used to be GreekTown into a modern community. The old immigrant houses are being repurposed and retrofitted to accommodate the technology, the design-sense and the reconstituted families of the new inhabitants. Plexiglass, and brushed-chrome, and barn-doors, and multi-purpose kitchens, and huge bathrooms have redefined the interior spaces of the old houses. David-and-Marc’s home is one of those renovated structures and it’s elegant in its reincarnation. The wedding reception for family and Open House for friends were both held at their house.