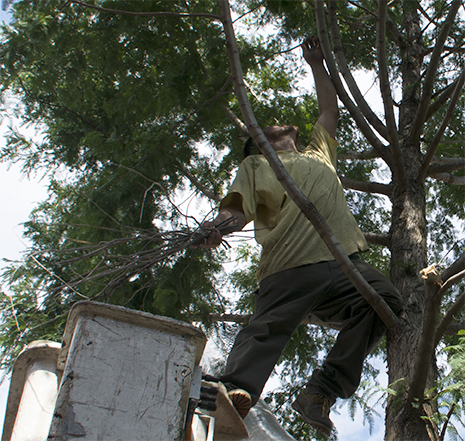 Today, the tree-service guys came to prune the lowest branches of the Redwood. And Jason – the pruner in the pic – used a cherry-picker for the job. He parked the humongous bucket-truck in the alley, and because there were parked cars, he only dropped two safety feet. He did an amazingly job setting the right foot a millimeter away from the parked Acura tire. (In another life, he was a surgeon.) He then telescoped the bucket, using the 60 foot hydraulic lift, over all the wires and brought it into my back-yard and into the Redwood. After cutting the six bottom limbs, he climbed into the tree and removed all the deadwood. My father would have used all these dead branches – frasce; the large ones as stakes in his garden and the small one for kindling .