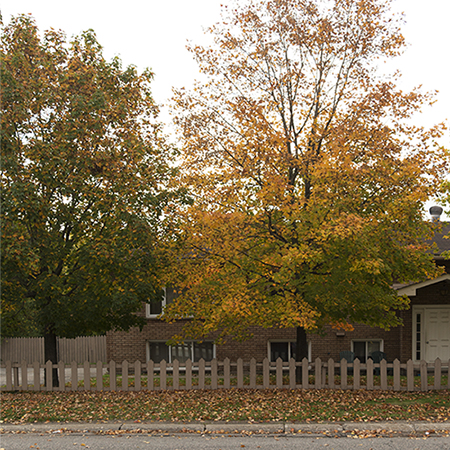 The last time I was here, at this time of year, was October of 1969. (Writing that date makes is seem so long ago.) I was a freshman at the University of Windsor and I drove up with a fellow student. He was older and could rent a car and in exchange, I invited him to my parents’ for Canadian Thanksgiving. He was an American from Cincinnati.

It’s a nice time of year, the weather is mild, but everywhere there are indicators of winter. Every yard, has hockey nets and hockey sticks – the kids are anticipating upcoming season; the gardens are all harvested; and the lawns have had their final cut.

The image on the left is of the corner of Korah Road and Douglas Street. The house is both a residence and a music school. When we came from Italy in 1957, the area was full of stores. My parents ran a tab at Tagliabracci Groceries; their first chesterfield they bought at Spatone Furniture; and in between the two was the pharmacy where I bought my DC and Marvel comics. A couple of doors was the infamous Roosevelt Hotel Bar. No self-respecting Italian immigrant, of my parents’ age, went anywhere near the place, but the previous generation of immigrants, the ones well on their way to assimilation, the ones who had traded in their home-made wine for Carling Black Label; the ones who could speak English without an accent; the ones who drove new cars not used junkers; they flocked to the Roosevelt.