golden showers and end of empire 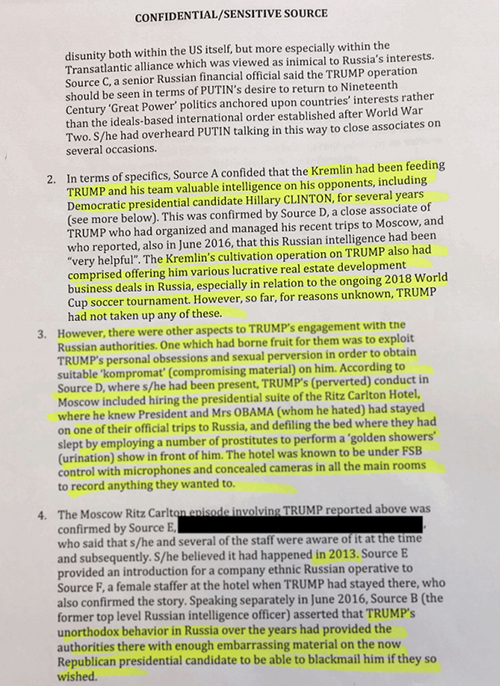 3. However, there were other aspects to TRUMP’s engagement with the Russian authorities. One which had borne fruit for them was to exploit TRUMP’s personal obsessions and sexual perversion in order to obtain suitable ‘kompromat’ (compromising material) on him. According to Source D, where s/he had been present, TRUMP’s (perverted) conduct in Moscow included hiring the presidential suite of the Ritz Carlton Hotel, where he knew President and Mrs OBAMA (whom he hates) had stayed on one of their official trips to Russia, and defiling the bed where they had slept by employing a number of prostitutes to perform a ‘golden showers’ (urination) show in front of him. The hotel was known to be under FSB control with microphones and concealed cameras in all the main rooms to record anything they wanted to. 1

one – liberals as scolds

One of the reason I am willing to put up an image of a page, of the unverified salacious report, is because after reading The Washington Post’s Margaret Sullivan’s column – How BuzzFeed crossed the line in publishing salacious ‘dossier’ on Trump – all I could think of is the Trumpettes who during the campaign would get all indignant and self-righteous when anyone repeated the word pussy, and yet these same women championed the man who used the slur and they helped elect him president. Now, Margaret Sullivan seems to be offended by the latest dip into the cesspool. Guess pussy has seeped into the vernacular and is no longer banned in DC salons, but golden showers is too perverted for sensitive ladies taking tea in their solariums.

Sullivan argues that BuzzFeed, by publishing the unverified report, is playing into the hands of the president-elect’s insistence that the media is spreading fake-news, that the media is biased. (Did Breitbart News worry about inflaming Democrats when it published all the lies about Clinton? Did Matt Lauer feel bad when he went after Clinton about her emails, but let Trump off without even a challenge?) Journalists, understand that sitting in your well-appointed DC offices, sporting hipster-glasses, silk neck-wear, blue-suede Hubbards and writing liberal treaties also feeds the cesspool. Your shit just seeps in through a different hole.

The Right has learned how to use digital warfare and installed one of its own in the Oval Office. (Did The Right know that Liberals wouldn’t know what to do in an election that trafficked in shit. Did The Right suspected that the liberal-fringe wouldn’t turn out or if they did, they would vote for him? Did The Right suspected that the suburban-housewives would stay home on election day?) The Left wants to rise above the muck, the sewage; the Left wants to continue playing with tea-sets and niceties and huff-and-puff at a Congress and Senate controlled by Republicans. LIBERALS, you’re assholes; civility, ideas, right and wrong went out the window on November 8. Confrontation, lies, conspiracy-theories and Russian-hacks won on November 8. Greed and rapacity are the new norms.

BTW, isn’t that what the British did during the colonial skirmishes – denounce the primitive, savage settlers for not knowing the proper way to fight? Can you image sneaking up on a well-healed Redcoat? Who are these peasants, these farmers, don’t they recognize their betters? Are Liberals the new Redcoats?

Liberals … they still believe that scolding and pointing out the wrongs of the incoming administration will result in change. But then scolding has been associated with Liberals for a while now. Obama scolds and wrings his hands each time some crazy pulls a gun and kills innocents. And much of Clinton’s campaign was a scolding of the ultimate brat – the comb-over man-child of 721 Fifth Avenue.

There has also been scolding around food and weight. What’s more recognizable than skinny Liberals drinking San Pellegrino while eating kale in tony suburban bistros? The man-child was photographed eating deep-fried chicken and slurping a giant sugar-drink. There has been scolding around language. How many news-stories have there been about people losing their livelihood because they used a politically inappropriate word? The man-child swore from him podium for all the world to hear – “Get him the fuck out of here.” And after eight years of inflicting their superiority across the cultural landscape, a group of Americans revolted and elected a brat to blunt this mindset. He may have exposed the elitists’ attitudes – the us versus them; the duplicity – talking about fair housing, but hiding in rich suburbs; talking about public education, but segregating their kids in private schools; but it was his defiance of the holier-than-thou, of the scolds that got him elected.

I believe that America is at the same point that England was at the beginning of the 20th century. England was ruled by a corrupt, degenerate upper-class – England’s one-percenters – that owned all the wealth and lived off the exploitation of its people. American government is totally controlled by the party that represents the interest of its corporate oligarchy and it was voted into office and power by the least financially secure voters.