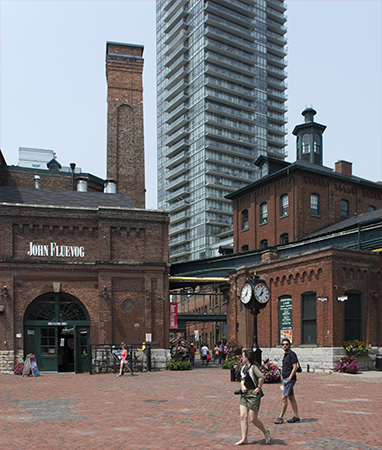 Downtown Toronto is slowly being over-developed into a Blade-Runner environment. There are sections of the Gardner Expressway, downtown, where it’s lined with glass high-rises on both sides and when driving this portion, it feels like a Blade Runner set. All that’s missing is the constant acid-rain that bathed the building in the 1982 neo-noir classic.

The Torontonians refer to the over-development as the Manhattanization of their city. They insist that the many, many glass towers are making their city into a replica of the mess on the Hudson. And is everyone forgetting that winter here is not just cold, but f’in freezing?

I think of Manhattanization as a disposable architecture, allowing real-estate conglomerates to take down and rebuild every twenty years. And here in the north country even sooner. Bet that in twenty years, the glass tower behind the century old distillery buildings will be gone.

Today, we went to the old distillery district that has been reclaimed and re-imagined as a tourist area. We had lunch at a Mexican restaurant; the food was very good. One of the things that I always find in Toronto is that tourists destinations are less full of clap-trap and cheap memorabilia. The distillery district is populated with high-end restaurants, antique shops and boutique clothing stores.