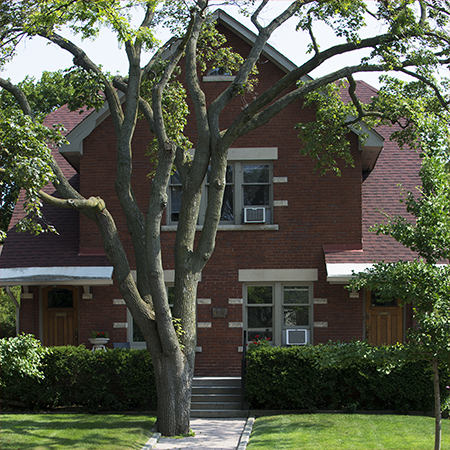 arts and crafts homes in toronto

High Park is the largest in-city park in Toronto. It begins on Bloor Street and stretches all the way down to the shore of Lake Ontario. And I’ve walked around the High Park neighborhoods all my life. My grandparents lived on Jane Street and High Park was an easy destination. I remember on one visit, my mother and I walked from my grandparents’ house all the way to the entrance of High Park.


I found the following text while doing research on the Arts and Crafts movement in Toronto.

By the time the Arts and Crafts movement had reached Canada, the defining elements were well set. The overlying theme was the house as a living element within the natural environment; it was based on the function of the home as a shelter for the family, not a banner building relentlessly trumpeting the owner’s status. Houses were meant to fit intrinsically into their sites: orientation of the house was based on the relationship of the house to the garden. Rooms were positioned to take advantage of the movement of the sun for warmth and light during daylight hours. The grandiose central entrances of so many other styles were often replaced by side entrances that allowed for manipulation of the front façade for light or garden use. Entrances were often recessed, accessed through a covered porch, giving the impression of solidity and permanence, almost like entering a cave dwelling.

And then a comment on what is happening in modern day Toronto.

Scott Weir’s excellent article on Arts and Crafts homes in Toronto sums up the sad fate of many of these homes beautifully. He says “It may be that the Arts and Crafts house’s lack of ostentation has been its undoing.” Many of these fine homes are being torn down and replaced by monster homes that are beige on beige monuments to the owner’s pretensions and self delusions. Where the Arts and Crafts aesthetic was to provide a beautiful living space built in harmony with nature and the surrounding area, many of these new buildings are simply overlapping masses of ill proportioned, unrelated architectural features. Return On Investment building (ROI Modern) is wiping out some of the best houses in the province. Instead of fine homes where people actually live and are part of the community, there is a growing trend for ‘renovators’ to hop from one spot to another gutting old homes and gutting established neighborhoods and leaving behind houses, not homes, that can only be described with Dickens’ famous term “Architectooralooral”.