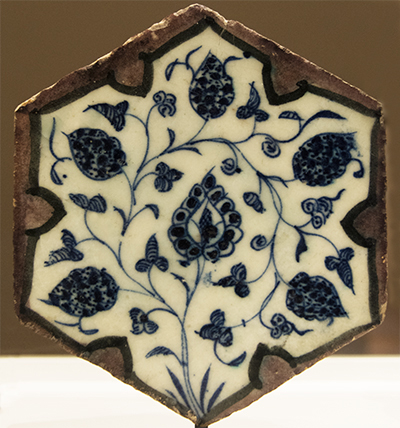 How can I pass up such a header – a French article, an accent aigu and an ancient Islamic title.

The pic on the left, is of an 15th, underglazed, painted tile from either Syria or Egypt. The blue-and-white color scheme was meant to imitate Chinese porcelain. The tile is one of the 300 artifacts and art pieces on display at the Aga Khan Museum in North York.

The building is faceted, white geometry; the gardens, a glimpse into paradise; the black pools, the quality of mercy. The Museum represents Islamic culture from the Iberian Peninsula to the Malay Archipelago. Its collection is remarkable and beautifully displayed; its textiles and clothing shimmer in the ambient light; its Korans and manuscripts illuminate (the museum holds the earliest surviving manuscript of Avicenna’s Canon of Medicine, the text that kept ancient Greek thought alive while the west plunged into the dark ages); its apothecary jars chipped, but lustrous; its ancient pottery ablaze with reds, oranges and blues.

Prince Shah Karim Al Husseine – The Aga Khan – is the 49th hereditary Imam of the estimated 15 million Shia Muslims and a direct descendant of the Prophet Muhammad. He was ready to build his museum in London; a site, on the southern bank of the Thames, had already been selected, but it became politically difficult to locate an Islamic museum in Brexit-drunk England. The push-back brought the Prince, his famed Japanese architect and his collection of Islamic masterpieces, across the pond, to multi-cultural Toronto.