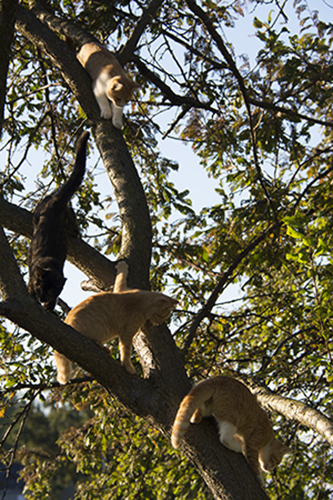 Saturday morning, at first-light, I’m outside with my camera. And the cats, assuming that I’m there to feed them, swarm around me. There are currently 14 cats on the property and none of the females will go into heat until early spring. This will be the first winter Rainer-and-Lynn will have this large of a pride through winter.

One of the things I like best about the image of the cats in the tree is the direction of the light. The morning sun falls on the eastern side of the tree trunk.

The image on the right is of Ron’s 1988 Lincoln Town Car (I refer to it as the boat ). It was his brother Louie’s car. We are on Gore Road, facing east. Ron had gone home to Leamington to water the new sod he had put in around his house. In the image, Rainer is standing on the left and Franchino is talking to Ron who is in the driver’s seat.