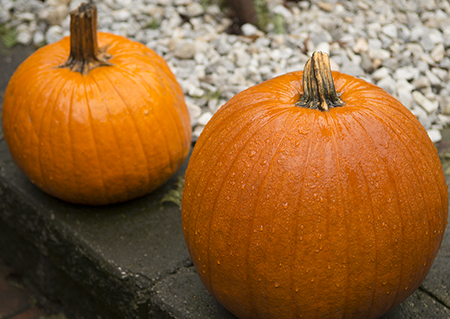 the witch of november

My mother was telling me that they were having miserable weather, that the winds were wrecking havoc across the city. When the weather front hit us yesterday and today, we had the rain and cold, but no winds. This is the first true fall weather of the year and I almost want to say, about time. The pumpkins were the only color is an otherwise dreary, gray and cold day.

Last night, I made comfort food – pipi e patate. I fried potatoes and red-peppers – an old Calabrese dish that fits cold damp weather. The variations are on how long you cook the pipi e patate; I like the potatoes to be firm, so I toss them in first and brown them before throwing in the red-peppers. And I do not cook the red-peppers to limpness; I like some crunch in my fried peppers. And last night for some reason, I didn’t add onion. I used my dad’s recipe and he doesn’t add onions to his oil when he’s frying.

Listening to Motongator Joe’s cover of The Wreck of the Edmund Fitzgerald and wanting to use the line – T’was the witch of November come stealin’ – for this post, I did some research on the term – witch of November.

The witch of November refers to the strong winds – gusts greater than 100 mph – that frequently howl across the Great Lakes in the fall. The witches are caused by intense low atmospheric pressure over the Great Lakes pulling Arctic air from the north and warm Gulf air from the south. When these contrasting air masses collide, hurricane-force winds churn up massive waves across the lakes.1

Since the mid-1800s there have been more than two dozen of these cyclones recorded in the Great Lakes, most of them in November, and many affecting the largest lake, Lake Superior.

And finally, BuzzFeed Canada had some amazing photos by Dave Sandford. He recently spent time on Lake Erie shooting the Great Lake’s turbulent fall season. From mid-October to mid-November, the longtime professional sports photographer traveled each week to Port Stanley, Ontario, on the edge of Lake Erie to spend hours taking photos.3