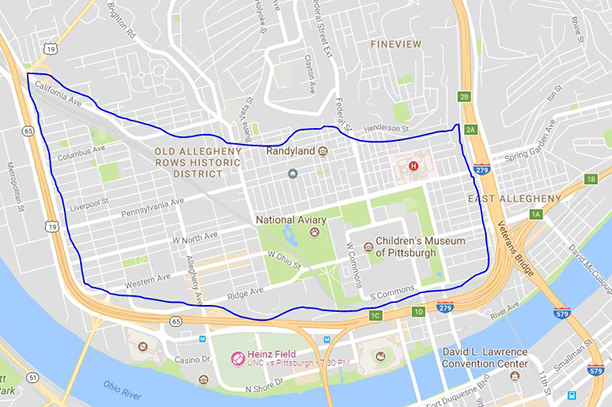 the other side of the tracks

The area, outlined in blue, is bounded on the east by Highway 279, on the south and west by Route 65; its northern border is the first ring of hills that reach all the way into the middle of the state. This area is sometimes know as the Northside Flats (it’s the northern shore of the Allegheny River). The area is approximately one-and-a-half square miles or 960 acres, and it has been the focus of great renovation and redevelopment over the last 40 years. The Northside contains the 4 largest historic districts – The Mexican War Street, Allegheny West, Manchester and Deutschtown/East Allegheny; it’s the home of The Mattress Factory, The Warhol Museum, The Children’s Museum, Alphabet City/City of Asylum, The National Aviary, Allegheny General Hospital and the oldest park in the city – Allegheny Commons.

I’m trying to develop a walking routine that will get me ready to hike the Inca Trail in late May, and this morning I decided to walk up the hills east of Highway 279. The area is know as Spring Garden. Many life-long Northsiders who lived in the Flats migrated to Spring Garden when gentrification and redevelopment forced them out of their old neighborhoods. The contrast between the Northside Flats and this old neighborhood was amazing. The slopes of Spring Garden feel more like the hills and hollers of West Virginia than a Pittsburgh neighborhood. The housing is edgy, the yards are littered, the sidewalks are crumbing, but the views of downtown are spectacular. As I’m walking and taking pictures, the mailman comes over to tell me there’s a Pit-bull running loose, so I may want to move on and take the headphones off. 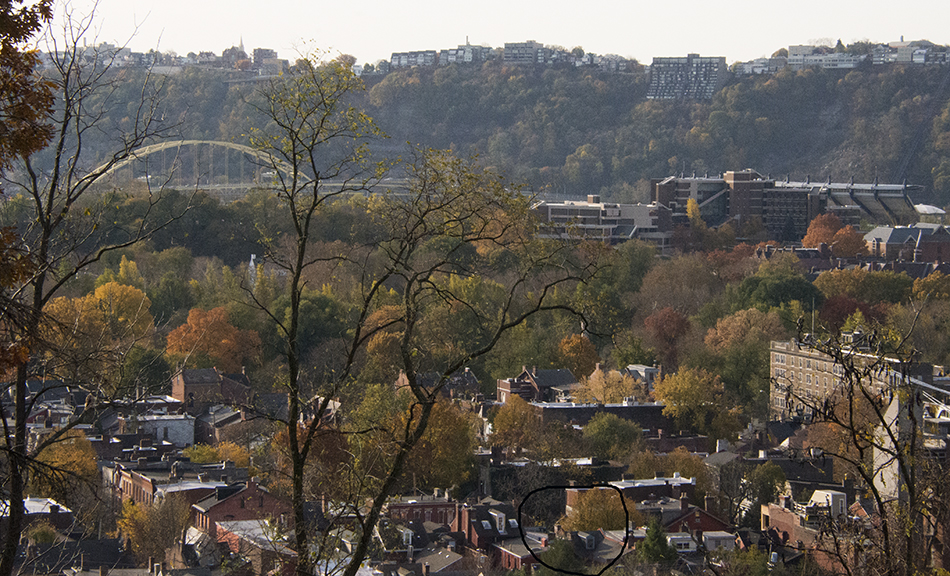 The image is taken from Perrysville Avenue the ridge that borders the Flats and I’m shooting south. The Northside Flats – the facing hillside is Mount Washington; the tall structures on the right are CCAC-Allegheny; you can also see one wing of Heinz Stadium. The bridge on the left is the Fort Pitt spanning the Monongahela River at the Point. The black circle in the bottom is my house. And all the trees in front of my house are the park – Allegheny Commons.