For years, officials in the city of Cosenza have been working on an ambitious urban regeneration project. One of their primary goals was to bridge the gap between two neighborhoods, Contrada Gergeri on the eastern shore of the Crati and Via Reggio Calabria on the western shore of the Crati. (Cosenza is at the confluence of the Busento and Crati rivers; the Busento terminates in Cosenza and merges with the Crati that feeds into the Ionian Sea.) To accommodate this difficult site, Santiago Calatrava suggested a cable-stayed bridge with a single inclined pylon rising above its urban surroundings. 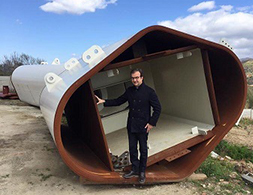 The slender steel pylon has a quadrilateral cross section shape with rounded corners (the image on the left is of Mario Occhiuto, the mayor of Cosenza, inside the pylon) and it is inclined backwards to show visible tension as well as create a clear visual direction towards the city. Overall the strings and form of this structure suggest a giant harp that’s been floated above moving water. The structure stretches some 460 feet between the two neighborhoods. Traffic for both vehicles and pedestrians moves in both directions.

“I’m proud and honored to be a part of this momentous urban improvement project for the City of Cosenza,” Santiago Calatrava said in a statement. “Thank you to the officials of Cosenza who have placed their trust in me to deliver such an important piece of urban infrastructure …”

Facts: – Cosenza, with a population of 71,000, is a city in Calabria (population – 735,000); it is also the capital of the Province of Cosenza which has a population of 268,000. The ancient town is the seat of the Accademia Cosentina, the second academy of philosophical and literary studies to be founded in the Kingdom of Naples (1511) and one of the oldest in Europe. To this day, the city remains a cultural hub in Southern Italy, with several museums, theaters, libraries and the University of Calabria.