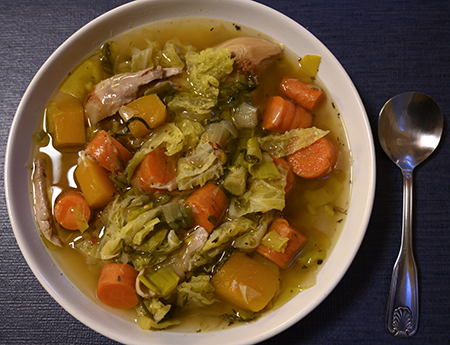 •  In the winter chill, making soup is comforting. Outside it’s dark and cloudy and the polar vortex promises to lock us all in, so I decided to take all the vegetables I had and make soup.

The chicken thighs were $4.99; the squash is from last year; the Savoy cabbage was slowly wilting in the crisper; the fresh fennel and leeks were recent purchases, but they’ll add a sweet side-flavor.

Drizzling olive oil on top of all the mingled flavors added a new taste. (The only ingredient that got lost in the mix was the garlic.) A crusty baguette, a savory soup – a seasonal dinner on a deep and dark mid-winter.

The pic was shot with the Nikon Ƶ 7 and no flash. What I like best is the light-source moving from left to right – the blue fading from light to dark.

There are signs insisting that pedestrians are not welcomed on Walter Road, but I climb it regularly. It’s a better workout than the flats around the lake; also, it’s not isolated like Ridge Road, the other hill-road in the Park. The valley, the road climbs through, is open and its slopes silence the traffic.

•  Another asshole billionaire is toying with running for president in 2020. And unlike the current Orange-Pcock (Pcock), this one talks anything but populist. He’s opposed to government-run, universal health-care, because it would put the health-care industry out of business and that it’s just Un-American. He also goes on about how expensive it would be to provide health-care for everyone. And still, he wraps himself in the cloak of I’m for ordinary Americans.

Cable news is all over this story, because nothing is coming out of the White House that warrants their flailing, sputtering reactions. And this self-delusional corporate Jack-in-the-box thinks that because he ran a coffee company, he can run the country. But in 21st century America, a red hat replaces the KKK hood, a wall becomes a holy symbol and billionaires believe their wealth is proof of talent.

•  The longest-running government shutdown, cost the economy $11 billion, with $3 billion that will never be recovered. All because the Orange-Pcock wanted to show that his dick was bigger than Nancy Pelosi’s. An executive that has had a Republican Congress for two years, decided to test the new Democratic majority in the House by closing down the government until he got $5.7 billion for his wall. Never mind that 800,000 Federal employees and hundreds of thousands of sub-contractors would go without pay.

And after going 35 days and two missed paychecks, many federal-government workers were left lining up at food banks or filing for unemployment. It could take some households months to fully recover, especially families with government contractors, who won’t receive any back pay.

But the Marie Antoinette award goes to Pcock’s daughter-in-law. “Listen, it’s not fair to you, and we all get this, but this is so much bigger than any one person. It’s a little bit of pain, but it’s going to be for the future of our country.”

•  Back in November, I was visiting with Frank and we went to the newly opened Canada Goose store at the Yorkdale Mall. The place is chuck-full of luxury outlets and top-shelf shoppers.

After trudging to the opposite end of the mall, we found that we couldn’t walk into the store, instead we had to get in line. Neither of us could believe it. My first time ever standing in line to give away my money. Whoever came up with the idea of having customers stand in line, outside the store, is a marketing genius.

The line was full of Asians and Frank tried to strike up a conversation with the couple in front of us. The young woman was thoroughly disgusted with these two old men wanting to talk about standing in line. The boyfriend seemed to know to keep his mouth shut and look pretty.

Nineteen century Toronto had its pasty-white, snobby Brits. In the New Gilded Age, the old robber barons have been replaced by very rich Asians.

The flight home was also full of young Asians; I politely asked the person next to me if he was visiting Pittsburgh. He explained that there was a large number of Asians from Toronto who attend the University of Pittsburgh and Carnegie Mellon. Both schools have great reputations and are a 45 minutes plane-ride from home.

Well, since the mall-line and the Asian-Canadian (A-C) invasion, I’ve started paying attention to winter coats. Every time I’m in Oakland and I see an Asian student, I look to see if they’re wearing Canada Goose. And the red-white-and blue logo is everywhere. (My Pittsburgh friends don’t understand my A-C watch; they don’t know the Goose brand and don’t know its value, its status for hip, rich Canadians.)