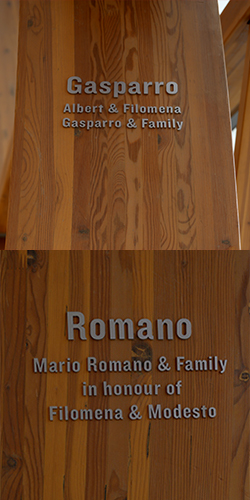 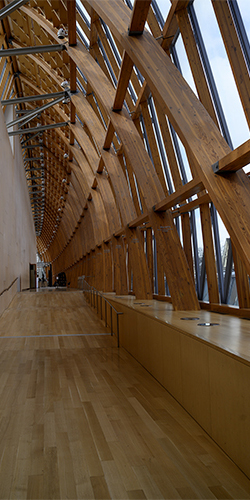 Today we went to the Art Gallery of Ontario; it’s one of my favorite Toronto museums. The building was re-imagined by Canadian-born architect Frank Gehry in 2008. On the second floor, on the northern face, Gehry designed a long gallery – Galleria Italia – which displays the names of rich, prominent Torontonians, of Italian heritage, who contributed to the redesign. The image on the left is the gallery; the image on the right is an example of the commemorative plaques on the spine-line ribs of the block-long gallery.

What was interesting about the plaques, was that the man’s name had been Anglicized – Albert, Benny, Jimmy – but the women’s names retained their Italian formats. Frank suggested that the men Anglicized their names, because they were interacting with the English majority. The women, who stayed home and socialized in their immigrant communities, didn’t need to change their names. (My dad became Frank, only his Italian friends called him Ciccio. My mother kept her Italian name – Mafalda.)