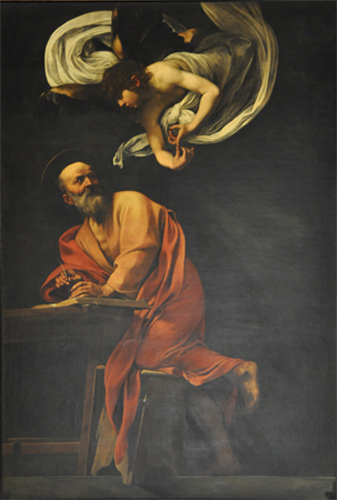 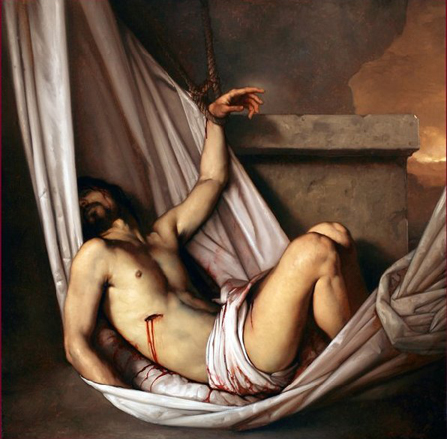 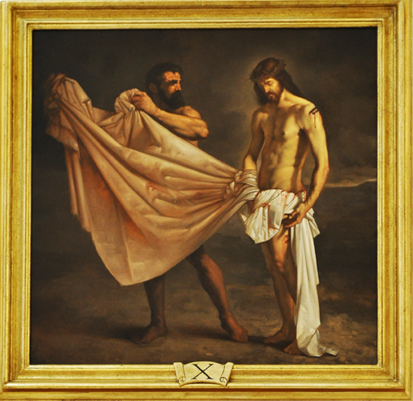 and carrie is stripped of her humanity

I’ve been watching “Homeland” and the new episodes present the main character as about her career, about her leadership, about her drive, about her ambition. Looking back at previous seasons it is now clear that the Brody character gave Carrie her compassion. But without Brody, Carrie is truly The Drone Queen – the title of the first episode of the new season. At one point she almost drowns her baby daughter, because she is a distraction, a pawn in the Queen’s way.

I am very curious about Ferri’s commission for Via Crucis. When I saw the paintings in the cathedral in Noto, I couldn’t believe they were in a church. (The photograph on the left is of the 10th Station. Each painting is in a gold-leaf frame.) The images are raw, almost erotic and the Christ has a gym-rat body. Such an interpretation of the Way of the Cross would never be allowed in rabid, conservative America. (Ferri’s Caravaggesque style straddles conventions. But New-World Catholics don’t even know who Caravaggio is, let alone understand a modern artist who paints in the Baroque style.) Catholicism in the west is about violent opposition to abortion and gay-marriage; most American Catholics know little about empathy for the less fortunate or about their Church’s artistic patronage. But then, they too have been stripped of their legacy, their righteousness and what we see is their obsession to punish. Maybe, they would welcome Ferri’s paintings, after-all there’s a lot of S&M references in them. 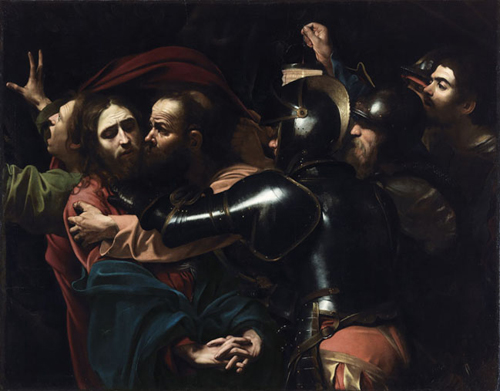 I’ve been listening it Dylan’s “With God on Our Side” and
the second-to-last verse:
through many a dark hour
i’ve been thinkin’ about this
that jesus christ
was betrayed by a kiss
but i can’t think for you
you’ll have to decide
whether judas iscariot
had god on his side.
brought me to Caravaggio’s painting.

The Cattura di Cristo nell’orto – The Taking of Christ – was painted in Rome at the end of 1602. (The Italian title is great, full of alliteration and hard vowels.) Breaking with past traditions, Caravaggio offered a new perspective of the betrayal narrative; all emphasis is directed on the action perpetrated by Judas and the guards on an overwhelmed Jesus. The fleeing disciple on the left is John and the lantern holder on the right is Caravaggio himself at the age of thirty one.

The flight of the terrified John contrasts with the entrance of the artist; it seems that Caravaggio is making the point that even a sinner, one thousand years later, has a better understanding of Christ than one of his own apostles. Two of the more puzzling details of the painting are the fact that the heads of Jesus and John seem to visually meld together; and the prominent presence of the arresting officer’s highly polished, metal-clad arm.

The painting is in Dublin in the National Gallery of Art.

where in the u.s.a. is caravaggiosearching for caravaggio – 5th entry

The map is from the website – www.caravaggiogallery.com – Caravaggio Gallery. (List of thumbnails is clockwise beginning bottom left in Texas.) 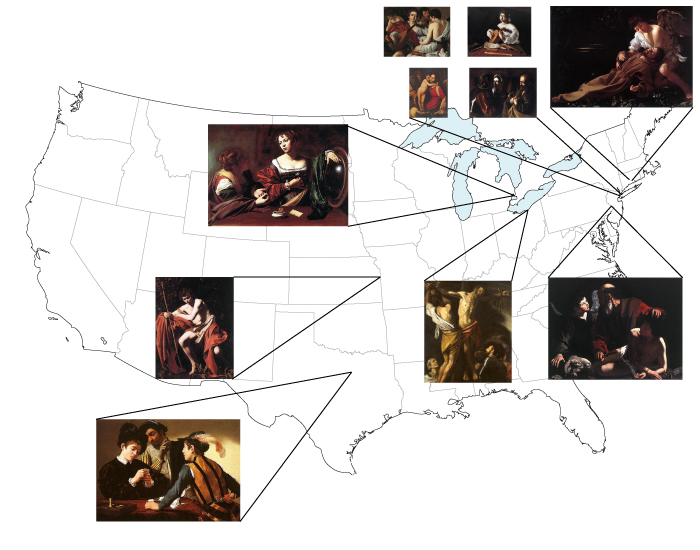