This year my cousin found a house to rent in Pellaro, a suburb of Reggio. The town is about 20 minutes south of center city. I pulled into Pellaro on Tuesday and it wasn’t until Saturday that I got a chance to shoot pictures.

The house is an inheritance and the young man who now owns it is trying to make it a rental. It was a beautiful and huge house. The problem was that we were probably in Italy the two hottest weeks and the house has no central air. The first night we had no air in the bedrooms; the second night I had air, but Rose and Derrick had to wait until the third night before they had air in their bedroom. 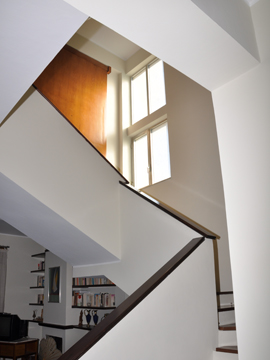 Some things that I really liked about the house:
– the foyer
– the stairs
– the roof terrace.

In town, we spent most of our money at the Tahiti Coffee shop, the boutique market around the corner and the vegetable market across the street. At Tahiti we had granita di caffe every morning; at the market we bought local wine and local cheeses; at the fruit stand we bought tomatoes, plums, figs and cucumbers. The food was wonderful. I don’t think we had anything that wasn’t fresh and had great taste.

The main square however was dilapidated and dirty. The streets were not clean, they were full of broken cement and there was dirt and sand everywhere. I’d wear Crocs when walking around, because my feet would sweat from the heat and I’d come home and had to go wash my feet because they were filthy with dirt.

The town had no pretensions and on one level that was quite nice, however it made for a “working vacation.” And for the most part I never mind that, the problem was there were few options outside of going food shopping and preparing meals. The one night we went out to eat, to a highly recommended restaurant, we came away very disappointed. The menu was nothing unusual or particularly good. In Italy I’ve always eaten great bread, at this restaurant we had American-style rolls. (There is a fascination with all things American, but bread is not something we Americans do well. Why would you serve American-style soft bread in the land of crusty bread?)

The best part of both the house and Pellaro was the rooftop terrace and the view of the Straight of Messina, the mountains of Sicily and Mount Etna.

Sicily was perpetually covered in a haze. That may have been, because it was extremely warm and the heat generated a foggy vapor that clung to the mountains. I kept thinking that in the fall, once the miserable heat lifted and there was no humidity the view across the Straight would be amazing. There were many nights when Etna was under cloud cover.

The other great thing about having Sicily across from the roof top terrace was the boat traffic on the Stretto and the planes landing. The boat traffic made the scenery idyllic. The jet traffic brought us back to reality and allowed us to look at the underbelly of the planes as they buzzed overhead.

The roof top like the rest of the house was under realized. A retractable awning would make it usable all day. Instead we had to wait until the sun was ready to set before we could endure the heat. Having our late afternoon drink on the terrace instead of on one of the side balconies would have allowed us more time staring at Sicily. I used up all my staring time. It was something that made being in Pellaro worthwhile.